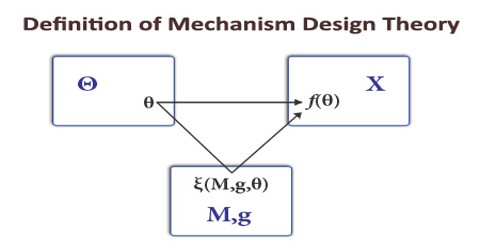 Markets, or market-like institutions, often allocate goods and services efficiently. Long ago, economists theoretically proved this efficiency under fairly stringent assumptions concerning, among other things, the nature of the goods to be produced and traded, participants’ information about these, and the degree of competition. Mechanism design theory allows researchers to systematically analyze and compare a broad variety of institutions under less stringent assumptions. An economic theory that seeks to determine the situations in which a particular strategy or mechanism will work efficiently, compared to situations in which the same strategy will not work as efficiently. Mechanism design theory allows economists to analyze and compare the way in which markets or institutions, such as a government, efficiently allocate goods and services given a gap in information between buyers and sellers.

Mechanism design theory shows which mechanisms are optimal for different participants, say sellers or buyers. Such insights have been used to better understand market mechanisms that we frequently observe. The theory also admits detailed characterizations of optimal auction forms when these conditions do not hold. Likewise, mechanism design theory has enabled economists to find solutions to the monopoly pricing problem, showing, for example, how the price should depend on quality and quantity so as to maximize the seller’s expected revenue.

The goal is to find a mechanism with an equilibrium decision outcome, sometimes required to be unique that is best according to the given measure of quality. The strength of mechanism design lies in its generality: any procedure, market-based or not, can be evaluated within a unified framework. Leonid Hurwicz, Eric Maskin and Roger Myerson were awarded the 2007 Nobel Prize in Economics for their contributions to Mechanism Design Theory. To the non-economist, mechanism design theory seems to be a highly abstract construct: technically impressive, perhaps, but with little relevance to policy and everyday life. In fact, despite its complexity and mathematical character, mechanism design is deeply embedded in policy.

Since mechanism design theory allows economists to relax restrictions on some variables, such as the importance of information control, it allows researchers to determine how different parties can benefit when a particular strategy is used in varying situations. Incentive Compatibility and the Revelation Principle

The seminal work of Leonid Hurwicz (1960,1972) marks the birth of mechanism design theory. In Hurwicz’s formulation, a mechanism is a communication system in which participants exchange messages with each other, messages that jointly determine the outcome. These messages may contain private information, such as an individual’s true or pretended willingness to pay for a public good. The mechanism is like a machine that compiles and processes the received messages, thereby aggregating (true or false) private information provided by many agents. Each agent strives to maximize his or her expected payoff (utility or profit), and may decide to withhold disadvantageous information or send false information. This leads to the notion of “implementing” outcomes as equilibria of message games, where the mechanism defines the “rules” of the message game. The comparison of alternative mechanisms is then cast as a comparison of the equilibria of the associated message games.

Mechanism design theory has also had a big effect on our thinking about development problems in poor countries. Today’s focus is on fostering institutions and individual initiative. Traditional solutions to community problems such as access to credit, land sharing arrangements and natural resources management have been revisited and improved in light of mechanism design theory, and new solutions have been proposed. The theory represents a major breakthrough in the modern economic analysis of institutions and markets and will have a lasting influence for the design of economic policies.