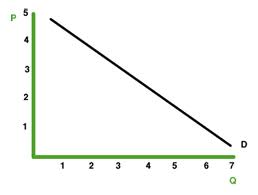 The demand curve should account for factors such as taste, income, expectations, price of related items and the number of buyers available. Economists and businesses use the demand curve to attempt to gauge some of the behaviors of consumers in the marketplace.

It is a graphical representation of price- quantity relationship. Individual demand curve shows the highest price which an individual is willing to pay for different quantities of the commodity. While, each point on the market demand curve depicts the maximum quantity of the commodity which all consumers taken together would be willing to buy at each level of price, under given demand conditions. Demand curve has a negative slope, i.e, it slopes downwards from left to right depicting that with increase in price, quantity demanded falls and vice versa. The reasons for a downward sloping demand curve can be explained as follows-