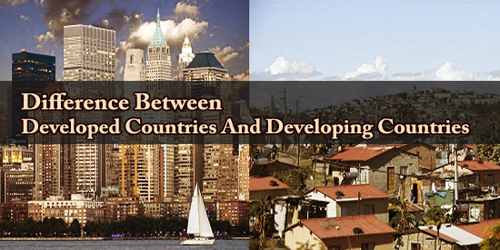 Developed Countries refers to the sovereign state, whose economy has highly progressed and possesses great technological infrastructure, as compared to other nations. The countries with low industrialization and low human development index are termed as developing countries.

Human Development Index (HDI) statistics rank the countries on the basis of their development. The country which is having a high standard of living, high GDP, high child welfare, health care, excellent medical, transportation, communication and educational facilities, better housing, and living conditions, industrial, infrastructural and technological advancement, higher per capita income, increase in life expectancy, etc. are known as Developed Country. These countries generate more revenue from the industrial sector as compared to the service sector as they are having a post-industrial economy.

As of 2010, the list of developed nations included the United States, Canada, Japan, Republic of Korea, Australia, New Zealand, France, Germany, Italy, Scandinavia, Singapore, Japan, Taiwan, Israel, countries of Western Europe, and some Arab states. In 2012, the combined populations of these countries accounted for around 1.3 billion people. The populations of developed countries are generally more stable, and it is estimated that they will grow at a steady rate of around 7% over the next 40 years.

In addition to having high per capita income and stable population growth rates, developed nations are also characterized by their use of resources. In developed countries, people consume large amounts of natural resources per person and are estimated to consume almost 88% of the world’s resources.

A developing country also called a less developed country or an underdeveloped country is a nation with a less developed industrial base, and a low Human Development Index (HDI) relative to other countries. On the other hand, since the late 1990s, developing countries tended to demonstrate higher growth rates than the developed ones. There is no universal, agreed-upon criterion for what makes a country developing versus developed and which countries fit these two categories, although there are general reference points such as a nation’s GDP per capita compared to other nations.

Less developed countries are the second type of developing nations. They are characterized by having the lowest income, with a general per capita income of approximately less than $1,000. In many of these countries, the average per capita income is even lower, at around $500. The following are the names of some developing countries: Colombia, India, Kenya, Pakistan, Sri Lanka, Thailand, Turkey, and other countries in southern Asia. In 2012, there were around 0.8 billion people who lived in these countries and survived on very little income.

Some people say the world is like a corporate company. Example: