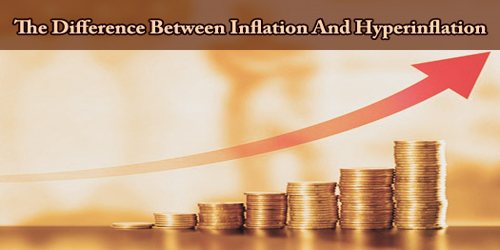 The Difference Between Inflation And Hyperinflation

Inflation affects economies in various positive and negative ways. The negative effects of inflation include an increase in the opportunity cost of holding money, uncertainty over future inflation which may discourage investment and savings, and if inflation were rapid enough, shortages of goods as consumers begin hoarding out of concern that prices will increase in the future. Positive effects include reducing unemployment due to nominal wage rigidity, allowing the central bank more leeway in carrying out monetary policy, encouraging loans and investment instead of money hoarding, and avoiding the inefficiencies associated with deflation.

There are two major types of inflation: demand-pull and cost-push. Demand-pull inflation occurs when consumers have greater disposable income. Having more money to spend allows people to want more products and services. Expansionary fiscal and monetary policies, consumer expectation of future price increases, and marketing or branding can increase demand.

Hyperinflation is a term to describe rapid, excessive, and out-of-control general price increases in an economy. While inflation is a measure of the pace of rising prices for goods and services, hyperinflation is rapidly rising inflation, typically measuring more than 50% per month.

Although hyperinflation is a rare event for developed economies, it has occurred many times throughout history in countries such as China, Germany, Russia, Hungary, and Argentina.

Hyperinflation is crueler where inflation is fast and can be painful for citizens. It was one of the reasons for WWII when Germany went into hyperinflation and the government failed and German administration was handed over to Hitler who was the Army General of Germany. He decided to loot the neighboring nations to get Germany out of its predicament. He expected countries like Poland and Hungary to have a lot of gold reserves which can be temporarily used to build the German economy back to life. Inflation in Germany was so hyper that those days 1 dollar would fetch 1 mn German marks.

Difference Between Inflation And Hyperinflation:

One of the worst hyperinflations that was ever seen was in Hungary after World War II. It was a case where prices were doubling every 15 hours. That is a mind-boggling figure.

It’s believed that by 1922, Austria was witnessing inflation that was about 1426%. These kinds of figures are unheard of today and hyperinflation has almost evaporated these days.

In fact, countries are looking at inflation that is just not happening. For example, in the US, the Federal Reserve has kept interest rate hike on hold, as inflation is just not picking up. The Fed is reluctant to hike interest rates, as it is not sure if inflation will reach its target level of 2 percent.

Today, most economists favor a low and steady rate of inflation. Low (as opposed to zero or negative) inflation reduces the severity of economic recessions by enabling the labor market to adjust more quickly in a downturn and reduces the risk that a liquidity trap prevents monetary policy from stabilizing the economy. The task of keeping the rate of inflation low and stable is usually given to monetary authorities. Generally, these monetary authorities are the central banks that control monetary policy through the setting of interest rates, through open market operations, and through the setting of banking reserve requirements.

Too much inflation is never a good thing, but significant inflationary levels can exist without being considered hyperinflation. For instance, if the U.S dollar suddenly moves from being worth twice as much as the Canadian dollar to be worth half as much, it is not generally considered hyperinflation. It is severe inflation and can cause significant economic instability but is unlikely to completely decimate the economy as a whole.

While hyperinflation is constantly on the minds of investors and economists in times of economic uncertainty, it is extreme. Investment in precious metals, multiple currencies or critical commodities may help protect against potential hyperinflation.