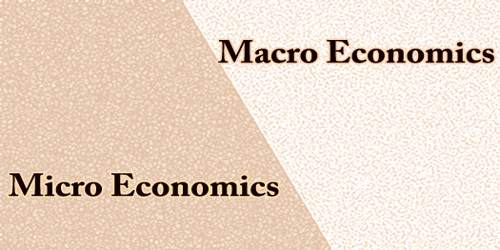 Difference Between Micro And Macro Economics

Economics is divided into two important sections, they are: macroeconomics & microeconomics

Microeconomics is the study of particular markets, and segments of the economy. It looks at issues such as consumer behavior, individual labor markets, and the theory of firms. It ascertains how the limited resources are allocated among various individuals to satisfy their wants? As well as it specifies the conditions for the best possible utilization of the resources, in order to attain maximum output and social welfare.

Microeconomics analyzes how individuals and households spend their income? How do people decide what amount to save for future contingencies? What set of goods and services best fulfills their needs and wants, in the limited income?

The main key role of microeconomics is to examine how a company could maximize its production and capacity so that it could lower prices and better compete in its industry. A lot of microeconomic information can be gleaned from the financial statements.

The important key factors of microeconomics are :

Microeconomics also determines what products and how many products the firm should manufacture to sell? At what price the firm should offer its goods and services to the target audience? What sources of finance are to be used by the firm to commence or operate the business? How many and at what rate the workers are to be hired to work for the firm? When should the firm expand, downsize, and close the business?

Macroeconomics is a branch of economics that depicts a substantial picture. It scrutinizes itself with the economy at a massive scale, several issues of an economy are considered. The issues confronted by an economy and the headway that it makes are measured and apprehended as a part and parcel of Macroeconomics. It looks at ‘aggregate’ variables, such as aggregate demand, national output, and inflation.

In macroeconomics we normally clarify the survey of how the nation’s total manufacture and the degree of employment are associated with features (called ‘variables’) like:

Macroeconomics not only discusses issues with which the economy goes through but also helps in resolving them, thereby enabling it to function efficiently.

The points given below explains the difference between micro and macroeconomics in detail:

The main difference is that micro looks at small segments and macro looks at the whole economy. But, there are other differences.

The classical economic analysis assumes that markets return to equilibrium (S=D). If demand increases faster than supply, this causes the price to rise, and firms respond by increasing supply. For a long time, it was assumed that the macroeconomy behaved in the same way as microeconomic analysis. Before, the 1930s, there wasn’t really a separate branch of economics called macroeconomics.

Great Depression and birth of Macroeconomics –

In the 1930s, economies were clearly not in equilibrium. There was high unemployment, output was below capacity, and there was a state of disequilibrium. Classical economics didn’t really have an explanation for this dis-equilibrium, which from a micro perspective, shouldn’t occur.

In 1936, J.M.Keynes produced his The General Theory of Employment, Interest, and Money; this examined why the depression was lasting so long. It examined why we can be in a state of disequilibrium in the macroeconomy. Keynes observed that we could have a negative output gap (disequilibrium in the macro-economy) for a prolonged time. In other words, microeconomic principles of market-clearing didn’t necessarily apply to macroeconomics. Keynes wasn’t the only economist to investigate this new branch of economics. For example, Irving Fisher examined the role of debt deflation in explaining the great depression. But, Keynes’ theory was the most wide-ranging explanation and played a large role in creating the new branch of macro-economics. Since 1936, macroeconomics developed as a separate strand within economics. There have been competing explanations for issues such as inflation, recessions, and economic growth.

Micro and Macro Economics are neither different subjects, nor they are contradictory, rather, they are complementary. As every coin has two aspects micro and macroeconomics are also the two aspects of the same coin, wherein one’s demerit is others merit and in this way, they cover the whole economy. The only important point which makes them different is the area of application.