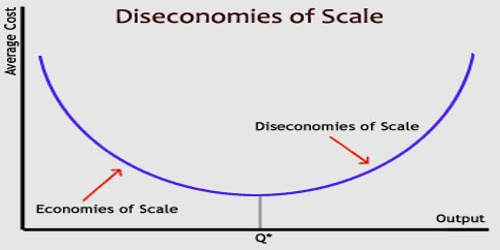 Diseconomies of scale can occur for a variety of reasons, but the cause usually comes from the difficulty of managing an increasingly large workforce. As a firm grows, it seeks to reduce the marginal cost of its products, increasing efficiency as it increases production. Improved efficiency results in greater profit per unit of production. However, when there are diseconomies of scale, after a certain point, which varies by industry and by business, the marginal cost for the product begins to rise. Factors contributing to inefficiency may include cumbersome bureaucracy, high costs of geographical expansion, high legacy costs (such as pension liabilities from an aging workforce), and overlapping product lines that compete for the same market and production resources. The standard curve showing the relationship between product cost and quantity and the downward curve toward economies of scale and the upward curve into diseconomies of scale demonstrates this process.

Solutions: Solutions to the diseconomies of scale for large firms may involve splitting the company into smaller organizations. This can either happen by default when the company is in financial difficulties, sells off its profitable divisions and shuts down the rest; or can happen proactively if the management is willing.

When a company/product reaches the point where its marginal cost increases, it becomes a target for smaller, more efficient firms to compete for its business. A company at this point may evaluate restructuring its operations, spinning off various production units, or closing some of its operations. Companies also use a variety of strategies to minimize diseconomies of scale, such as flattening management structure, investing in technology to improve communication, careful market segmentation, and decentralizing production.