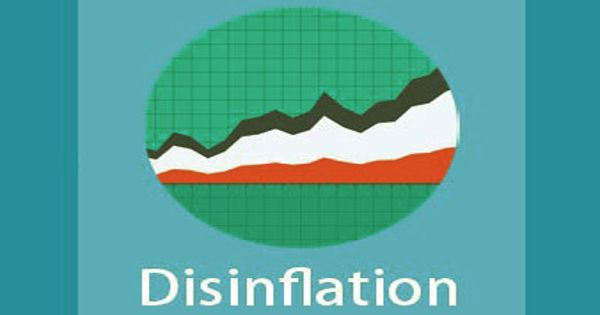 Disinflation – a decrease in the rate of inflation

Disinflation is a temporary slowing of the pace of price inflation and is used to describe instances when the inflation rate has reduced marginally over the short term. It is a decrease in the rate of inflation – a slowdown in the rate of increase of the general price level of goods and services in a nation’s gross domestic product over time. It occurs when price inflation slows down temporarily. It is the opposite of reflation. Unlike deflation, this is not harmful to the economy because the inflation rate is reduced marginally over a short-term period.

Disinflation can be caused by a recession or when a central bank tightens its monetary policy. It occurs when the increase in the “consumer price level” slows down from the previous period when the prices were rising. It may also be caused by the tightening of monetary policy by a central bank. When this happens, the government may also begin to sell some of its securities, and reduce its money supply. Disinflation benefits certain segments of a population, such as people who are inclined to save their earnings.

When people talk of disinflation, they often mean a period of low inflation. For example, inflation falling below the inflation target of 2%.  Explanation, if the annual inflation rate for the month of January is 5% and it is 4% in the month of February, the prices disinflation by 1% but are still increasing at a 4% annual rate. Again if the current rate is 1% and it is -2% for the following month, prices disinflation by 3% i.e. [1%-(-2)%] and are decreasing at a 2% annual rate. While a negative growth rate—such as -2%—indicates deflation, disinflation is demonstrated by a change in the inflation rate from one year to the next. So disinflation would be measured as a change of 4% from one year to 2.5% in the next.