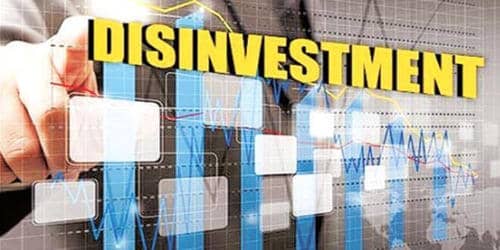 Disinvestment is the withdrawal or reduction of investment. It means the sale or liquidation of assets by the government, usually Central and state public sector enterprises, projects, or other fixed assets. It refers to the use of a concerted economic boycott to pressure a government, industry, or company towards a change in policy, or in the case of governments, even regime change. It is the action of an organization or government selling or liquidating an asset or subsidiary. In business, it means to sell off certain assets such as a manufacturing plant, a division or subsidiary, or product line.

Disinvestment is aimed at reducing the financial burden on the government due to inefficient PSUs and to improve public finances. Whether disinvestment results in the divestiture or the reduction of funding, the primary objective is to maximize the return on investment (ROI) related to capital goods, labor, and infrastructure. It introduces competition and market discipline and helps to depoliticize non-essential services. For example, an electric generator manufacturer might sell off its consumer generator product lines and manufacturing facilities in order to raise money that can be used to expand its industrial generator product line.

Disinvestment is when governments or organizations sell or liquidate assets or subsidiaries. The term was first used in the 1980s, most commonly in the United States, to refer to the use of a concerted economic boycott designed to pressure the government of South Africa into abolishing its policy of apartheid. The government undertakes disinvestment to reduce the fiscal burden on the exchequer, or to raise money for meeting specific needs, such as to bridge the revenue shortfall from other regular sources.  The term has also been applied to actions targeting Iran, Sudan, Northern Ireland, Myanmar, and Israel.

In some cases, disinvestment may be done to privatize assets. When the government decides to transfer the ownership and control of a public sector entity to some other entity, either private or public, the process is called strategic disinvestment. However, not all disinvestment is privatization. It is the withdrawal of invested funds or the cancellation of financial aid, subsidies, or investment plans, as in a property, neighborhood, or foreign country. Some of the benefits of disinvestment are that it can be helpful in the long-term growth of the country; it allows the government and even the company to reduce debt.