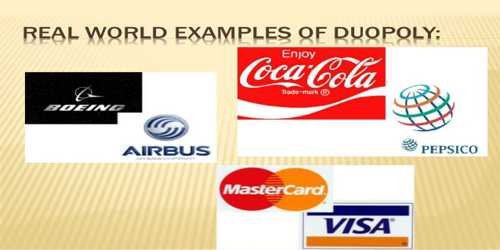 A true duopoly is a specific type of oligopoly where only two producers exist in one market. A duopoly is a situation in which two companies own all or nearly all of the market for a given product or service. In reality, this definition is generally used where only two firms have dominant control over a market. In the field of industrial organization, it is the most commonly studied form of oligopoly due to its simplicity.

Duopolies are most effective when the demand for the duopoly’s product is not greatly affected by price. This is also why duopolies are more effective in the short term; over the long term, prices often become more elastic as consumers find substitutes for the product. Also, demand volatility may lead to disagreements within a collusive duopoly regarding outputs and prices.

The most commonly cited duopoly is that between Visa and MasterCard, who between them control a large proportion of the electronic payment processing market. In 2000 they were the defendants in a US Department of Justice antitrust lawsuit. An appeal was upheld in 2004.

Duopoly is a form of oligopoly. In its purest form two firms control all of the market, but in reality the term duopoly is used to describe any market where two firms dominate

There are many examples of duopoly including the following: