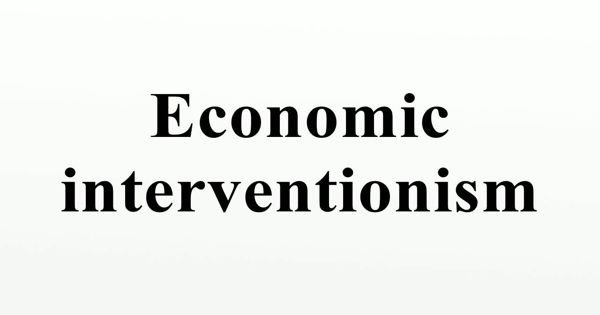 In the capitalistic economy, the means of production are owned by individuals or associations of individuals, such as corporations. Economic interventionism, sometimes also called economic statism and state interventionism, is an economic policy perspective favoring government intervention in the market process to correct market failures and promote the general welfare of the people. Therefore, this term can only be applied to capitalist markets or mixed economies where any government action would be called an intervention.

Interventionism is an act of government that both represents the initiation of physical force and, at the same time, stops short of imposing an all-round socialist economic system, in which production takes place entirely, or at least characteristically, at the initiative of the government. An economic intervention is an action taken by a government or international institution in a market economy in an effort to impact the economy beyond the basic regulation of fraud and enforcement of contracts and provision of public goods. It is an economic position favoring interventions in the market in the public interest on behalf of the government. 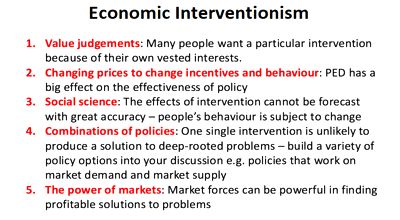 Laissez-faire economics, or market economy, is a form of social cooperation based on private ownership of the means of production. Economic intervention can be aimed at a variety of political or economic objectives, such as promoting economic growth, increasing employment, rising wages, raising or reducing prices, promoting income equality, managing the money supply and interest rates, increasing profits, or addressing market failures. An economic intervention is any action taken by a government or an international institution in a market economy or market-based mixed economy in an effort to impact the economy beyond the basic regulation of fraud and enforcement of contracts and provision of public goods.

Socialism, on the contrary, is a form of social cooperation that is based on public ownership of the means of production. The term intervention assumes on a philosophical level that the state and economy should be inherently separated from each other; therefore the terminology applies to capitalist market-based economies where government action interrupts the market forces at play through regulations, economic policies, or subsidies. It is governmental interference in economic affairs at home or in the political affairs of another country. The term intervention is typically used by advocates of laissez-faire and free markets.