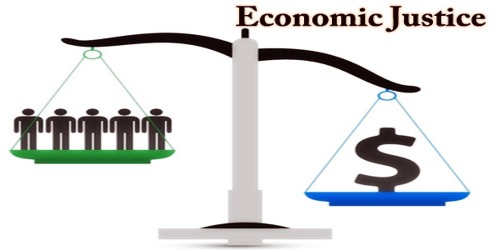 Economic justice about creating a successful economy that achieves sustainable growth. This means improving productivity, the measure of what we get out for what we put in. This is important in generating prosperity; but at the same time, it is also about creating good jobs that make the best of people’s talents. It is a component of social justice and welfare economics. It is a set of moral and ethical principles for building economic institutions, where the ultimate goal is to create an opportunity for each person to establish a sufficient material foundation upon which to have a dignified, productive, and creative life.

The concept of economic justice intersects with the idea of overall economic prosperity. There is a belief that creating more opportunities for all members of society to earn viable wages will contribute to sustained economic growth. When more citizens are able to provide for themselves and maintain stable discretionary income, they are more likely to spend their earnings on goods, which in turn drives demand in the economy.

Some ideas about justice and ethics overlap with the origins of economic thought, often as to distributive justice and sometimes as to Marxian analysis. The subject is a topic of normative economics and philosophy and economics. In early welfare economics, where mentioned, ‘justice’ was little distinguished from the maximization of all individual utility functions or a social welfare function. As to the latter, Paul Samuelson (1947), expanding on work of Abram Bergson, represents a social welfare function in general terms as any ethical belief system required to order any (hypothetically feasible) social states for the entire society as “better than”, “worse than”, or “indifferent to” each other. Kenneth Arrow (1963) showed the difficulty of trying to extend a social welfare function consistently across different hypothetical ordinal utility functions even apart from justice. Utility maximization survives, even with the rise of ordinal-utility/Pareto theory, as an ethical basis for economic-policy judgments in the wealth-maximization criterion invoked in law and economics.

Today, there are some five million people working in jobs that are below their skill level. This means they aren’t able to earn what they could, and the productive potential of the economy is held back. Sustainable growth matters because a declining economy hits the poorest hardest. Moreover, as new research in the Commission’s report shows, GDP growth is no longer translating into rising wages and we are in the midst of the longest stagnation in wages in 150 years.

Actually, economic justice is about making sure that the benefits of that growth go to people rather than profits as the Archbishop of Canterbury, one of the Commissioners, says we need “an economy in service of human flourishing”. The economy exists to serve society, not the other way round. This means over time, the economy should be increasing the share of national income that goes to wages rather than profits. Indeed, today, workers in Britain are getting the rawest deal since the Second World War as the labor share has declined since 1980 and flat-lined since 2010. Not only is that not good for living standards, it also reduces demand in the economy for goods and services and holds back growth. An economy that puts more into wages has the potential to grow faster by creating a virtuous circle.

Achieving economic justice can include addressing wage gaps and other deficiencies in individual earnings. For instance, there may be members of the workforce employed in jobs that do not make full use of their skills. This typically leads to workers earning wages that do not reflect the full potential of their professional abilities. As a result, they do not earn the highest income of which they are capable of.

Such a loss of possible wages creates an inefficiency in the economy because those workers will not have the income to participate to their fullest in it. If this inefficiency reaches significant magnitude wherein large portions of the population are not purchasing goods and services they might have otherwise spent their earnings on it can slow the economy.

Amartya Sen (1970), Kenneth Arrow (1983), Serge-Christophe Kolm (1969, 1996, 2000), and others have considered ways in which utilitarianism as an approach to justice is constrained or challenged by independent claims of equality in the distribution of primary goods, liberty, entitlements, opportunity, exclusion of antisocial preferences, possible capabilities, and fairness as non-envy plus Pareto efficiency. Alternate approaches have treated combining a concern for the worst off with economic efficiency, the notion of personal responsibility and (de)merits of leveling individual benefits downward, claims of intergenerational justice, and other non-welfarist/Pareto approaches. Justice is a subarea of social choice theory, for example as to extended sympathy, and more generally in the work of Arrow, Sen, and others.

Economic justice is making sure that prosperity is broadly-shared across households, regions, and sectors of the economy. Research from the IMF shows that redistributing income from the richest to the poorest in society actually boosts growth because poorer people are more likely to spend in the economy (a higher “marginal propensity to consume”). This flies in the face of the free market ideologues who have long claimed that inequality is the price paid for efficiency: that those at the top need to be disproportionately reward as ‘wealth creators’.

Finally, economic justice is about an economy that builds the common good the things that we share and value in common, from the natural environment through to public services. It recognizes that our national wealth is so much broader than household income or company profits. The good economy values the common good and invests in it.

One attempt to achieve economic justice is a system of progressive taxation, wherein the tax percentage increases as the base income amount increases. The goal of progressive taxation is to remedy income inequality and provide funds for social services, public infrastructure, and education. Earned income credit, affordable housing, and need-based federal financial aid for college students are other examples of economic justice institutions.

Actions that could serve economic justice also include efforts to end gender-driven salary gaps and providing more-thorough career preparation and education to low-income and at-risk segments of the population. Elevating wages for workers who have been earning lower wages is another proposed method of serving economic justice.

Such a strategy can be seen as a counterpoint to the idea of paying greater salaries to business executives who are associated with generating the wealth that pays the wages of others. Note that this idea doesn’t operate in reverse: When the economy sees a downturn, it is those who are among the poorest who face the most severe detriments, compared with those who are more affluent.

A broad reinterpretation of justice from the perspective of game theory, social contract theory, and evolutionary naturalism is found in the works of Ken Binmore (1994, 1998, 2004) and others. Arguments on fairness as an aspect of justice have been invoked to explain a wide range of behavioral and theoretical applications, supplementing earlier emphasis on economic efficiency (Konow, 2003).