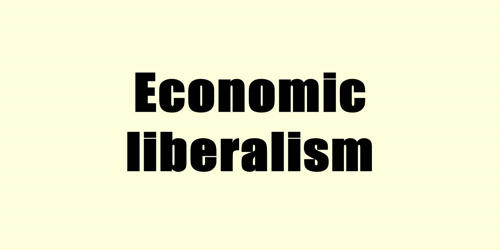 Economic liberalism is based on the principles of personal liberty, private property, and limited government interference. It is a political and economic philosophy based on strong support for a market economy and private property in the means of production. It is an economic system organized on individual lines, which means that the greatest possible number of economic decisions are made by individuals or households rather than by collective institutions or organizations. Although economic liberals can also be supportive of government regulation to a certain degree, they tend to oppose government intervention in the free market when it inhibits free trade and open competition. Economic liberalism has been described as representing the economic expression of liberalism. It is most often associated with support for free markets and private ownership of capital assets.

Economic liberalism refers to an economic philosophy that supports and promotes laissez-faire economics and private property in the means of production. The idea of ‘economic liberalism’ is often seen as emerging parallel with, and as a support to, political liberalism. As an economic system, economic liberalism is organized on individual lines, meaning that the greatest possible number of economic decisions are made by individuals or households rather than by collective institutions or organizations. One that has considerable traction is one that conflates Economic Liberalism with the Economic Liberalisation of Thatcherism and Blairism, which were in turn often driven by neo-liberal ideas. Consequently, it is provided with a heritage reaching back to the first arguments in free trade in the seventeenth century. It is an economy that is managed according to these precepts may be described as liberal capitalism or a liberal economy. It is the economic component of classical liberalism. The highest aim of economic liberalism is efficiency.