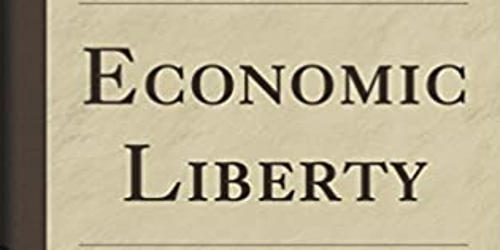 Economic liberty is the fundamental right of every human to control his or her own labor and property. It is the ability of people of a society to take economic actions. True liberty requires economic freedom—the ability to profit from our own ideas and labor, to work, produce, consume, own, trade, and invest according to our own choices. This is a term used in economic and policy debates as well as in the philosophy of economics. Without it, people are unable to improve the conditions under which they and their posterity will live. The ideals of economic liberty are strongly associated with healthier societies, cleaner environments, greater per capita wealth, human development, democracy, and poverty elimination.

One approach to economic liberty comes from the liberal tradition emphasizing free markets, free trade, and private property under free enterprise. Poverty, sicknesses, and ignorance are receding throughout the world, due in large part to the advance of economic freedom. Another approach to economic freedom extends the welfare economics study of individual choice, with greater economic freedom coming from a larger set of possible choices. In economically free societies, governments allow labor, capital, and goods to move freely and refrain from coercion or constraint of liberty beyond the extent necessary to protect and maintain liberty itself. Other conceptions of economic freedom include freedom from want and the freedom to engage in collective bargaining.

The Index of Economic Freedom documents the positive relationship between economic freedom and a variety of positive social and economic goals. The liberal free-market viewpoint defines economic liberty as the freedom to produce, trade, and consume any goods and services acquired without the use of force, fraud, or theft. Economic freedom is common in capitalist economies and must incorporate other civil liberties to be deemed as truly free. This is embodied in the rule of law, property rights and freedom of contract, and characterized by external and internal openness of the markets, the protection of property rights, and freedom of economic initiative. It is the ability to prosper through the free exercise of economic activity while letting others do the same.