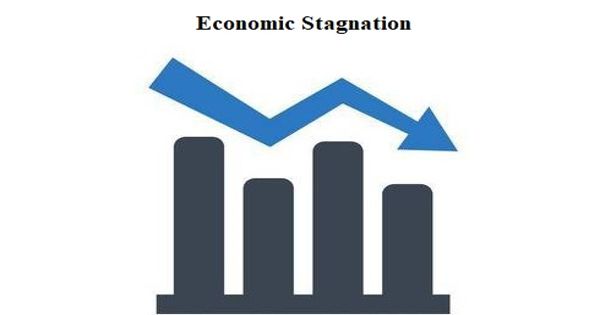 Stagnation is a prolonged period of little or no growth in an economy. Economic stagnation is a prolonged period of slow economic growth (traditionally measured in terms of GDP growth), usually accompanied by high unemployment. While there is no exact definition of economic stagnation, most analysts agree that positive growth under 2%-3% qualifies. It may occur because a business cycle is winding down because a catastrophic event has caused economic uncertainty, or for any number of other reasons.

Economic stagnation can occur on a macroeconomic scale or a smaller scale in specific industries or companies. It is a period where an economy grows at an extremely low rate without actually entering a recession. It can occur as a temporary condition, such as a growth recession or temporary economic shock, or as part of a long-term structural condition of the economy. During stagnation, it is unlikely that jobs will be created, wages will increase, or that the stock market will boom.

The distinctive economic stagnation and symptoms of state calamity drew the international financial institutions into the fray, at a moment when newly dominant political economy perspectives in the Western world called for far-reaching curtailment of the orbit of state action: privatization, deregulation, budgetary austerity, and rigor.

Economic stagnation and the relevant policy reactions have been of keen interest around the globe since the global financial crisis. Under some definitions, “slow” means significantly slower than potential growth as estimated by macroeconomists, even though the growth rate may be nominally higher than in other countries not experiencing economic stagnation. For growing countries, the model has transitional dynamics where growth first accelerates and then decelerates as income rises.

While stagnation is hard on the economy, it’s more common and potentially less disruptive than stagflation, which combines slowing growth with rising inflation. Japan’s dramatic transformation from economic success to economic stagnation offers important policy lessons to advanced countries everywhere that are struggling with stagnation. The term ‘Japanization’ is often used by economists to describe long-term stagnation and deflation. Furthermore, it is argued that without radical changes in certain key institutions, the current economic breakdown will continue indefinitely and will spread worldwide.