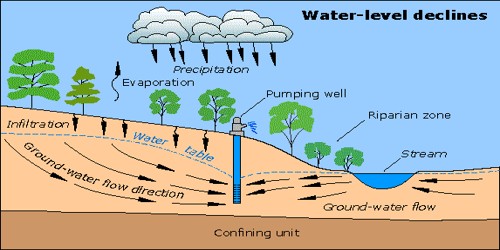 Groundwater depletion is a serious threat to the environment. The majority of our bodies and the Earth is made up of water. We may see the beautiful, flowing surface waters that make up the oceans, lakes and rivers, but this water is not always safe for consumption and is much more difficult to filter than groundwater. Consequently, water from the ground is especially valuable.

Some of the negative effects of groundwater depletion:

Lowering of the water table

The most severe consequence of excessive groundwater pumping is that the water table, below which the ground is saturated with water, can be lowered. For water to be withdrawn from the ground, water must be pumped from a well that reaches below the water table. If groundwater levels decline too far, then the well owner might have to deepen the well, drill a new well, or, at least, attempt to lower the pump. Also, as water levels decline, the rate of water the well can yield may decline.

Groundwater depletion will force us to pump water from deeper within the Earth. The more we extract groundwater right below the Earth’s surface, the further down we have to go in order to get more. As we have to extract water from deeper within the Earth, we find that there is less water available. Consequently, we will have to use even more resources to develop alternative methods to reach further into the ground.

Increased costs for the user

As the depth to water increases, the water must be lifted higher to reach the land surface. If pumps are used to lift the water (as opposed to artesian wells), more energy is required to drive the pump. Using the well can become prohibitively expensive.

Large bodies of water will become more shallow from groundwater depletion. A groundwater shortage keeps additional water from flowing into lakes, rivers and seas. This means that over time, less water will enter as the existing surface water continues to evaporate. As the water becomes less deep, it will affect everything in that particular region, including fish and wildlife.

The basic cause of land subsidence is a loss of support below ground. In other words, sometimes when water is taken out of the soil, the soil collapses, compacts, and drops. This depends on a number of factors, such as the type of soil and rock below the surface. Land subsidence is most often caused by human activities, mainly from the removal of subsurface water.

As large aquifers are depleted, food supply and people will suffer. The depletion of the Colorado River and the Ogallala aquifer serve as examples of large groundwater reserves that are being depleted, despite how necessary they are to our economy and well-being. The Ogallala aquifer has been collecting groundwater for thousands of years, and its water resources have to be shared among farmers and citizens.

We may pump groundwater instead of sourcing it from lakes and rivers, but that doesn’t mean that it isn’t connected to larger bodies of water. Groundwater that is deep within the ground often intermingles with saltwater that we shouldn’t drink. When freshwater mixes with saltwater, it is called saltwater contamination. This sort of contamination would raise the prices of drinking water for everyone because it will cost much more to pump and filter.

A lack of groundwater limits biodiversity and dangerous sinkholes result from depleted aquifers. Aquifers collect groundwater and are extremely important. For example, the residents near the Gulf of Mexico and Mexico City rely solely on aquifers. Wildlife, marine animals, and agriculture continues to suffer near the Gulf of Mexico because the Mississippi River runoff from industrial farming materials finds its way into the water. Parts of Mexico City are falling as the water table lowers and creates sinkholes that destroy buildings and homes.