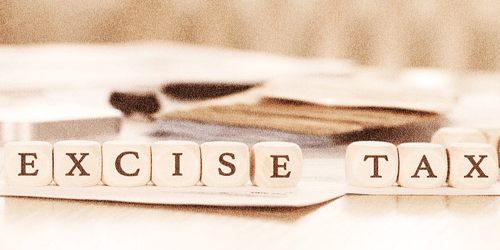 The excise tax, including sales taxes, is a kind of indirect tax in that it is passed on to the consumer at the point of sale. Excise taxes are domestic taxes that are levied on a government system rather than international taxes that are levied across borders. Revenue created by excise taxes addresses particular needs in a community that are often directly related to the product or service being taxed. Generally, a federal excise tax is imposed on purchases of motor fuel, plane fares, cigarettes, and other products and services.

For developed countries, there are few clear statistics on revenue generated by excise taxes, but they seem large, if widely variable. Sales tax varies from excise tax because it extends to almost all products, while excise taxes apply only in particular situations. These include:

Merchants pay wholesalers excise taxes and include excise taxes in the price of the commodity which increases the overall retail price. For developing countries, most excise revenue comes from commonly used goods such as cigarettes, alcohol, gasoline, cars, and (increasingly) electronic communications. Nevertheless, there are certain indirect taxes which are paid directly by a customer, including property taxes and sales taxes on other things in the retirement account.

Often referred to as a “sin tax,” the excise tax was used to deter what the government considers to be immoral conduct or to channel the revenue gained from it towards mitigating the detrimental effects of that activity. Federal, state, and local governments have the power to enact excise taxes; while income tax is the primary source of income for federal and state governments, excise tax revenue also represents a small portion of overall revenue.

Excise taxes are also imposed on luxury goods such as perfume, jewelry, vehicle, aircraft, and helicopter inputs (and these items themselves), high-end labels, and high-end services supplies (such as pool cleaning). These raise relatively small amounts of revenue because the degree of purchases of those items is little, but where income levels are rising they may contribute greater amounts of revenue. Excise taxes are primarily a business tax, cut loose other taxes a business must pay, like income taxes. Merchants could also be allowed deductions or credits on their annual revenue enhancement returns associated with indirect tax payments. Overall, the most important revenue-producing excise taxes within the U.S. come from motor fuel, airline tickets, tobacco, alcohol, health-related goods, and health-related services.

Excise taxes, from a social justice perspective, have their advantages and disadvantages. The advantages include:

Excise taxes are also levied with other activities relating to the retirement plans. Most citizens know such taxes as fines.