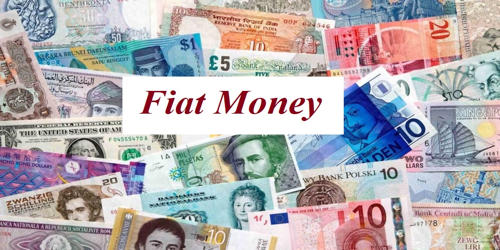 Fiat Money – a medium of exchange

Fiat Money is a kind of currency, issued by the government and regulated by a central authority such as a central bank. It is a currency (a medium of exchange) established as money, often by government regulation, but that does not have intrinsic value (value independent of the nominal value, such as a precious metal might have). It is government-issued currency that is not backed by a physical commodity, such as gold or silver, but rather by the government that issued it. It gives central banks greater control over the economy because they can control how much money is printed. However, since the value of fiat money lies solely in the faith of those using it, its value can be easily diminished and result in rapid inflation.

Fiat money does not have use value and has to value only because a government maintains its value, or because parties engaging in exchange agree on its value. The value of fiat money is derived from the relationship between supply and demand and the stability of the issuing government, rather than the worth of a commodity backing it as is the case for commodity money. It was introduced as an alternative to commodity money (a medium that has its own intrinsic value) and representative money. Such currencies act like legal tender and are not necessarily backed by a physical commodity. Representative money is similar to fiat money, but it represents a claim on a commodity.

Fiat money serves as a good currency if it can handle the roles that a nation’s economy needs of its monetary unit—storing value, providing a numerical account, and facilitating exchange. It has remained legal tender in most countries in part because they are highly stable and controlled. Fiat currencies such as the US Dollar, Pound, or Euro derive their value from the forces of supply and demand in the market. Such currencies are always at risk of becoming worthless due to hyperinflation as they are not linked to any physical reserves such as commodities.

Government-issued banknotes were used first during the 11th century in China. Fiat currency first came into being at around 1000 AD in China before spreading to other parts of the world. Since then, they have been used by various countries, usually concurrently with commodity currencies. Initially, currencies were based on physical commodities such as gold.  Fiat money started to predominate during the 20th century. It is only in the 20th century that President Richard Nixon stopped the conversion of the U.S dollar into gold. Since President Nixon’s decision to decouple the US dollar from gold in 1971, a system of national fiat currencies has been used globally.