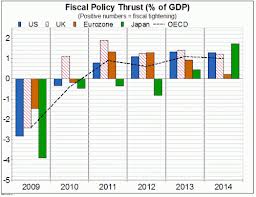 The fiscal multiplier is used to measure the result of government paying for the subsequent income level of that country. In theory, increased fiscal spending can cause increased consumption, which in turn leads to some sort of cycle of consumption and wealth creation. In economics, the fiscal multiplier would be the ratio of a change in national income on the change in government spending that triggers it. More usually, the exogenous spending multiplier is the ratio of a change in national income to any autonomous transform in spending that triggers it.