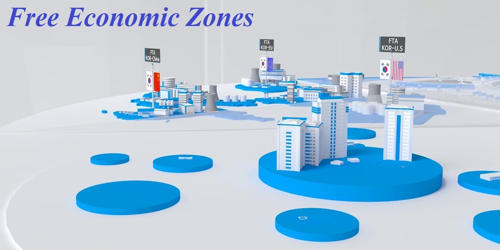 Free economic zones (FEZ) are an area within which goods may be received and stored without payment of duty. Free economic zones (FEZ) also known as free zones (FZ) are a class of special economic zone (SEZ) designated by the trade and commerce administrations of various countries. The term is used to designate areas in which companies are taxed very lightly or not at all to encourage economic activity. Free zones are also considered a lever for boosting technological skills, particularly in the auto-components industry. The free economic zones are viewed as an efficient model of administrative and economic management. They are aimed to foster local development attracting foreign investments and advanced technologies. Free zones generally fall into one of four categories: free trade zones, export processing zones, special economic zones, or industrial zones.

The taxation rules are determined by each country. The major preferences of the free economic zones include tax-free profits on all goods and services for five years, then a 50% discount. The discounted rate cannot exceed generally 12%. The World Trade Organization (WTO) Agreement on Subsidies and Countervailing Measures (SCM) has content on the conditions and benefits of free zones. Governments often add other benefits to the package, such as tax, regulatory, administrative, and financial incentives. They offer a vast of incentives including infrastructure, tax and customs exemptions, and simpler administrative procedures.

There are several definitions of FTZs referring to their different characteristics:

Some special economic zones are called free ports. They are fenced-in, duty-free areas, offering warehousing, storage, and distribution facilities for trade, transshipment, and re-export operations, without the intervention of the customs authorities. Since a major objective of creating free zones is to increase exports, most free zones around the world are either ring-fenced enclaves exempt from national import and export duties or formally operate outside the customs area of their host country. Free trade zones, typically located near seaports or airports, mainly offer exemptions from national import and export duties on goods that are re-exported.

Special economic zones apply a multisectoral development approach and focus on both domestic and foreign markets. Free-trade zones are mostly settled around major seaports, international airports, and national frontiers—areas with many geographic advantages for trade. Sometimes they have historically been endowed with favorable customs regulations such as the free port of Trieste. As Britain was proposing the creation of ten free ports after leaving the European Union in early 2020, the EU was clamping down on 82 free zones after finding that their special status had aided the financing of terrorism, money laundering, and organized crime. They offer an array of incentives including infrastructure, tax and customs exemptions, and simpler administrative procedures.