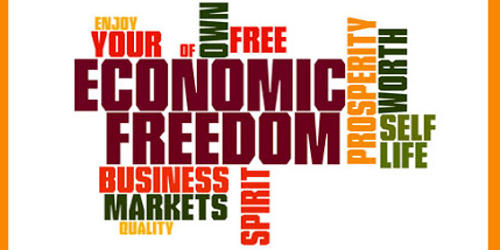 The free market is an economic system based on supply and demand with little or no government control. In economics, a free market is a system in which the prices for goods and services are self-regulated by the open market and by consumers. It is different from a regulated market or command economy. In a free market, the laws and forces of supply and demand are free from any intervention by a government or other authority, and from all forms of economic privilege, monopolies and artificial scarcities. In a free market, a majority of companies and properties are owned by individuals or entities in the private sector instead of the state. It is a summary description of all voluntary exchanges that take place in a given economic environment.

Economists define a free market as one where products are exchanged by a willing buyer and seller. Proponents of the concept of free-market contrast it with a regulated market in which a government intervenes in supply and demand through various methods such as tariffs used to restrict trade and to protect the local economy. In an idealized free-market economy, prices for goods and services are set freely by the forces of supply and demand and are allowed to reach their point of equilibrium without intervention by government policy. Based on its political and legal rules, a country’s free-market economy may range between a very large or entirely black market.

A free-market economy is one where supply and demand regulate production and labor as opposed to the government. Scholars contrast the concept of a free market with the concept of a coordinated market in fields of study such as political economy, new institutional economics, economic sociology, and political science. All of these fields emphasize the importance of currently existing market systems of rule-making institutions external to the simple forces of supply and demand which create space for those forces to operate to control productive output and distribution. Critics of the free market system tend to argue that certain market failures require government intervention.

However, in the real world, such an economic system rarely exists. Although free markets are commonly associated with capitalism within a market economy in contemporary usage and popular culture, free markets have also been advocated by anarchists, socialists, and some proponents of cooperatives and advocates of profit sharing. Tariffs imposed on imports and exports and legal restrictions such as the age restriction on alcoholic beverages are all barriers to a free market. A free-market economic system also helps sellers to create affordable prices for everyone.