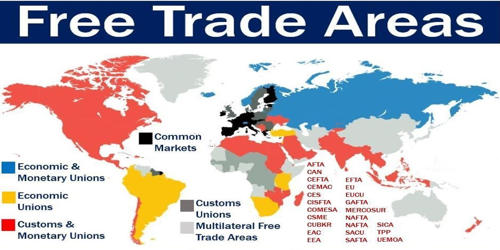 A free trade area is a group of countries that have few or no barriers to trade in the form of tariffs or quotas between each other. It is a region encompassing a trade bloc whose member countries have signed a free trade agreement (FTA).  The FTA’s main aims are to bring down barriers in trading, specifically tariffs and import quotas, and encourage the free trade of goods and services among its member countries. Such agreements involve cooperation between at least two countries to reduce trade barriers, import quotas, and tariffs, and to increase trade of goods and services with each other.

Free-trade Area is a region in which a group of countries has signed a free trade agreement and maintain little or no barriers to trade in the form of tariffs or quotas between each other. If natural persons are also free to move between the countries, in addition to a free-trade agreement, it would also be considered an open border. It can be considered the second stage of economic integration. These areas facilitate international trade and the associated gains from trade along with the international division of labor and specialization.

It is important to note the difference between customs unions and free-trade areas. Both types of trading blocs are related to internal arrangements which parties conclude in order to liberalize and facilitate trade among themselves. The crucial difference between customs unions and free-trade areas is their approach to third parties. However, free trade areas have been criticized both for costs that are associated with increasing economic integration and for artificially restraining free trade. While a customs union requires all parties to establish and maintain identical external tariffs with regard to trade with non-parties, parties to a free-trade area are not subject to such requirement. This means that there is no common set of policies that apply to all members and that each country in the free trade area imposes its own tariffs and quotas. Instead, they may establish and maintain whatever tariff regime applying to imports from non-parties as deemed necessary.

In a free-trade area without harmonized external tariffs, to eliminate the risk of trade deflection, parties will adopt a system of preferential rules of origin. This area is concerned with removing tariffs, as well as the measures that are applied to member countries as they trade with each other. For example, two countries that are members of a free trade area such as the US and Mexico refrain from imposing tariffs on each other. However, if the US imports bananas from South America, for example, it may apply a specific set of tariffs.