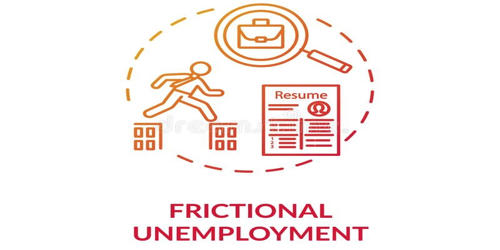 Frictional unemployment exists because both jobs and workers are heterogeneous, and a mismatch can result between the characteristics of supply and demand. The term ‘frictional’ is used to describe the fact that labor markets don’t immediately match up job demand with job supply. Workers choosing to leave their jobs in search of new ones and workers entering the workforce for the first time constitute frictional unemployment. It may also be called ‘search unemployment’ as it relates to the time taken to search for new employment. 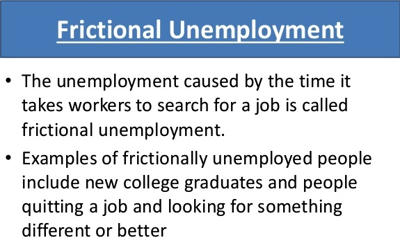 Frictional unemployment is always present in the economy. It would generally be classed as voluntary unemployment because workers are choosing to remain unemployed rather than get the first job that comes along. Workers and employers accept a certain level of imperfection, risk, or compromise, but usually not right away. They will invest some time and effort to find a better match. That is, in fact, beneficial to the economy since it results in a better allocation of resources. Natural unemployment also reflects the number of workers who are involuntarily unemployed, whether due to a lack of skill or replacement by technology.

The frictional unemployment rate is calculated by dividing the workers actively looking for jobs by the total labor force. It refers to the portion of the unemployment rate that results from labor market turnovers. The frictions in the labor market are sometimes illustrated graphically with a Beveridge curve, a downward-sloping, convex curve that shows a correlation between the unemployment rate on one axis and the vacancy rate on the other. The workers actively looking for jobs are typically classified into three categories: workers who left their job, people returning to the workforce, and new entrants. Changes in the supply of or demand for labor cause movements along the curve. An increase or decrease in labor market frictions will shift the curve outwards or inwards. It can be illustrated by someone who leaves their current job to look for another.