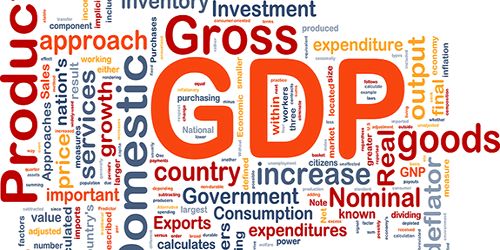 Gross Domestic Product (GDP) is a measure of income or output produced in an economy in a specified period of time. It is defined as the market value of all final goods, services, and structures produced domestically during a specific period of time.

Only domestically produced goods, i.e., goods that are produced by labor and property located in the United States are accounted in US GDP. It is irrelevant who are those labor resources engaged in production – U.S. nationals or foreigners, and it is also irrelevant who owns the physical resources that are used in production, whether U.S. nationals or foreigners. The only requirement is that the good be produced within the territory of the United States. Thus, umbrellas produced by a Korean national in New York are part of U.S. GDP (not a part of Korean GDP, because production activity is not located in Korea). For the same reason, services of an American petroleum engineer provided to an oil refinery in Venezuela are not included in U.S. GDP (but included in Venezuelan GDP).

Only goods produced in a specific period of time are included. For example, GDP of 1998 would not include goods produced in 1997, even if the good may have been sold in 1998. What matters is the year when a good is produced, not when it is sold. Whether a produced good is sold or not is not relevant for GDP. If a produced good is sold in the same period, the transaction is recorded in one sub-account of GDP, but if not sold in the same period, it is still recorded in the GDP, but in a different sub-account. For example, a car produced and sold to a household in 1998 is recorded under the heading of “personal consumption expenditures” of households, whereas a car produced but not sold in 1998 is recorded under the heading of “gross private domestic investment of businesses” – under the sub-heading of business inventory.

Crudely speaking, GDP is the sum of the quantity of each good produced times its market price, as expressed by the equation below equation:

where Qi and Pi are respectively the quantity of output and market price of Good i and n is the number of goods produced in the economy.

Simon Kuznets (Nobel Prize winner in Economics in 1971) introduced the national accounting system of computing GDP. A sampling technique is used to estimate it in two steps: first, counting the number of final goods, services, and structures produced in the country (Qi), and second, assigning a dollar value to the output (Pi). If assigning dollar values is done using the current market prices of outputs, it is called GDP in current prices or nominal GDP. There is one shortcoming of such a measure of value of total output in the economy. A growth in nominal GDP from one period to another does not necessarily mean that output in the economy has increased in real or physical terms (not necessarily an increase in Q), because nominal GDP may also rise when prices have risen (increase in P, called inflation). It is the consumption of actual physical goods, not their dollar values, that raises welfare of citizens; therefore, economists are interested to know whether physical output is rising over time. But, nominal GDP does not unambiguously tell us this information.

If in Equation 1 dollar values are assigned according to prices that prevailed in a base or reference year, then it is called GDP in constant prices or real GDP. The Bureau of Economic Analysis in the U.S. Department of Commerce publishes estimates of GDP figures every quarter. You can find data on GDP by visiting their website www.bea.gov.

The nominal GDP of the U.S. in Year 2005 was about $12.4 trillion, which when valued at prices of Year 2000 is equivalent to about $11 trillion of real GDP. This method of valuing outputs adjusts for distortions of inflation. Since real GDP for all years is calculated at constant prices of the base year (using prices that prevailed in Year 2000), an increase in real GDP unambiguously implies an increase in physical output (increase in Q, because P is held constant in Equation).