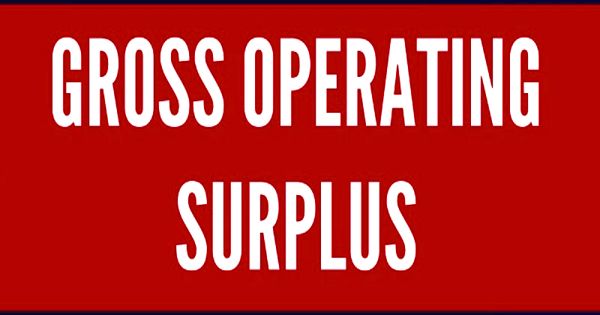 The gross operating surplus is the balance of the trading account for productive units. In the national accounts, gross operating surplus (GOS) is the portion of income derived from production by incorporated enterprises that are earned by the capital factor. It is equal to value-added minus payroll and other taxes on production and plus operating grants. It is calculated as a balancing item in the generation of income account of the national accounts.

GOS is the portion of income derived from production by incorporated enterprises that are earned by the capital factor. It can be calculated net, after deduction of the consumption of fixed capital.

It differs from the profits shown in the company accounts for several reasons. Only a subset of total costs is subtracted from gross output to calculate the GOS. For sole proprietorships, the balance of the trading account is the mixed-income. Essentially GOS is gross output less the cost of intermediate goods and services (to give gross value added), and less compensation of employees. The gross operating surplus can be calculated net, after deduction of the consumption of fixed capital. It is gross because it makes no allowance for depreciation of capital. It is the surplus generated by operating activities after the labor factor input has been recompensed.

A similar concept for unincorporated enterprises (e.g. small family businesses like farms and retail shops or self-employed taxi drivers, lawyers, and health professionals) is gross mixed-income. It can be calculated from the value added at factor cost less the personnel costs. Since in most such cases it is difficult to distinguish between income from labor and income from capital, the balancing item in the generation of income account is “mixed” by including both, the remuneration of the capital and labor (of the family members and self-employed) used in production. It is the balance available to the unit which allows it to recompense the providers of own funds and debt, to pay taxes, and eventually to finance all or a part of its investment.

Gross operating surplus and gross mixed income are used to calculate GDP using the income method. It represents the returns to the capital from production (in the same way that wages and salaries represent the return to labor).