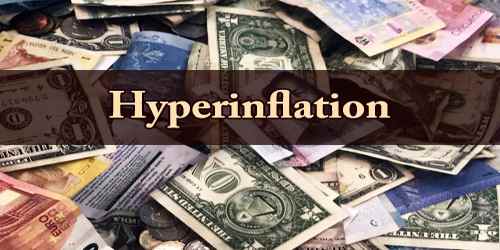 Hyperinflation is the phase where money has long ceased to be a store of value and is a primary contributor to economic instability. In economics, hyperinflation is very high and typically accelerating inflation. It quickly erodes the real value of the local currency, as the prices of all goods increase. This causes people to minimize their holdings in that currency as they usually switch to more stable foreign currencies, often the US dollar. Prices typically remain stable in terms of other relatively stable currencies.

Generally, inflation is termed hyperinflation when the rate of inflation grows at more than 50% a month. American economics professor Phillip Cagan first studied the economic concept in his book, “The Monetary Dynamics of Hyperinflation.”

Although hyperinflation is a rare event for developed economies, it has occurred many times throughout history in countries such as China, Germany, Russia, Hungary, and Argentina.

Hyperinflation has two main causes: an increase in the money supply and demand-pull inflation. The former happens when a country’s government begins printing money to pay for its spending. As it increases the money supply, prices rise as in regular inflation.

The other cause, demand-pull inflation, occurs when a surge in demand outstrips supply, sending prices higher. This can happen due to increased consumer spending due to a growing economy, a sudden rise in exports, or more government spending.

These five takeaways sum up our understanding of hyperinflation:

Hyperinflation is crueler where inflation is fast and can be painful for citizens. It was one of the reasons for WWII when Germany went into hyperinflation and the government failed and German administration was handed over to Hitler who was the Army General of Germany. He decided to loot the neighboring nations to get Germany out of its predicament. He expected countries like Poland and Hungary to have a lot of gold reserves which can be temporarily used to build the German economy back to life. Inflation in Germany was so hyper that those days 1 dollar would fetch 1 mn German marks.

One of the worst hyperinflations that were ever seen was in Hungary after World War II. It was a case where prices were doubling every 15 hours. That is a mind-boggling figure. It’s believed that by 1922, Austria was witnessing inflation that was about 1426%. These kinds of figures are unheard of today and hyperinflation has almost evaporated these days.

In fact, countries are looking at inflation that is just not happening. For example, in the US, the Federal Reserve has kept interest rate hike on hold, as inflation is just not picking up. The Fed is reluctant to hike interest rates, as it is not sure if inflation will reach its target level of 2 percent.

Hyperinflation is often associated with some stress to the government budget, such as wars or their aftermath, sociopolitical upheavals, a collapse in aggregate supply or one in export prices, or other crises that make it difficult for the government to collect tax revenue. A sharp decrease in real tax revenue coupled with a strong need to maintain government spending, together with an inability or unwillingness to borrow, can lead a country into hyperinflation.

The International Accounting Standards Board has issued guidance on accounting rules in a hyperinflationary environment. It does not establish an absolute rule on when hyperinflation arises. Instead, it lists factors that indicate the existence of hyperinflation:

Hyperinflation sends the value of the currency plummeting in foreign exchange markets. The nation’s importers go out of business as the cost of foreign goods skyrockets. Unemployment rises as companies fold. Then government tax revenues fall and it has trouble providing basic services. The government prints more money to pay its bills, worsening the hyperinflation.

If hyperinflation continues unabated, it nearly always eventually causes a major economic collapse. Severe hyperinflation can cause the domestic economy to switch to a barter economy, with significant repercussions to business confidence. It can also destroy the financial system as banks become unwilling to lend money.

One of the more devastating and prolonged episodes of hyperinflation occurred in the former Yugoslavia in the 1990s. On the verge of national dissolution, the country had already been experiencing inflation at rates that exceeded 75% annually. It was discovered that the leader of the then Serbian province, Slobodan Milosevic, had plundered the national treasury by having the Serbian central bank issue $1.4 billion of loans to his cronies.

The theft forced the government’s central bank to print excessive amounts of money so it could take care of its financial obligations. Hyperinflation quickly enveloped the economy, erasing what was left of the country’s wealth, forcing its people into bartering for goods. The rate of inflation nearly doubled each day until it reached an unfathomable rate of 300 million percent a month. The central bank was forced to print more money just to keep the government running as the economy spiraled downward.

The government quickly took control of production and wages, which led to food shortages. Incomes dropped by more than 50%, and production crawled to a stop. Eventually, the government replaced its currency with the German mark, which helped to stabilize the economy.

The United States – During the Revolutionary War, when the Continental Congress authorized the printing of paper called continental currency, the monthly inflation rate reached a peak of 47% in November 1779. These notes depreciated rapidly, giving rise to the expression “not worth a continental”. One cause of the inflation was counterfeiting by the British, who ran a press on HMS Phoenix, moored in New York Harbor. The counterfeits were advertised and sold almost for the price of the paper they were printed on.

During the U.S. Civil War between January 1861 and April 1865, the Confederate States decided to finance the war by printing money. The Lerner Commodity Price Index of leading cities in the eastern Confederacy states subsequently increased from 100 to 9,200 in that time. In the final months of the Civil War, the Confederate dollar was almost worthless. Similarly, the Union government inflated its greenbacks, with the monthly rate peaking at 40% in March 1864.