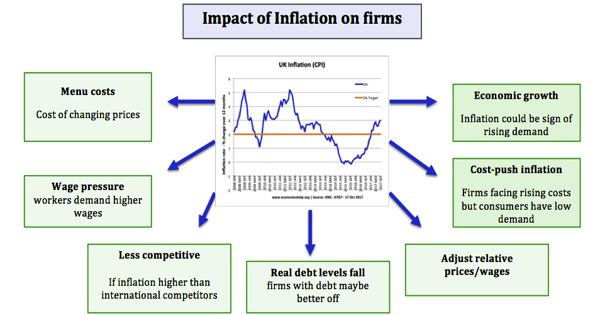 Inflation means an increase in the general level of prices. When prices for energy, food, commodities, and other goods and services rise, the entire economy is affected. Due to an increase in the general level of price, the value or purchasing power of money declines. It impacts the cost of living, the cost of doing business, borrowing money, mortgages, corporate, and government bond yields, and every other facet of the economy. In other words, inflation is an upward movement in the prices of goods and services.

When the price of goods or services decreases, the movement is referred to as deflation. Due to deflation, the value or purchasing power of money increases. However, the impact of inflation on economic recovery cannot be assessed with complete accuracy. Inflation is economically unsound, politically dangerous, and morally disastrous. If inflation becomes too high, the economy can suffer; conversely, if inflation is controlled and at reasonable levels, the economy may prosper. 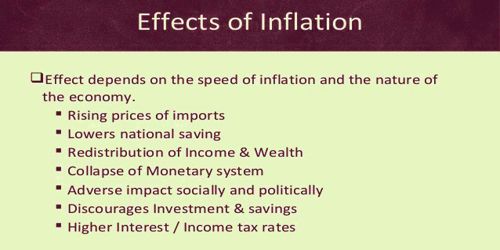 The impact of inflation can be explained as under:

Inflation causes a decline in the purchasing power of money. It increases expenditure and discourages saving. If interest rates on savings accounts are lower than the rate of inflation, then people who rely on interest from their savings will be poorer.

During inflation, the cost of living increases which hurts the people whose income is fixed. This happens when prices for food and domestic utilities such as water and heating rises at a rapid rate

Due to inflation, the purchasing power of money declines. As a result, debtors gain and creditors lose. There is also pressure on the government to increase the value of the state pension and unemployment benefits and other welfare payments as the cost of living climbs higher.

Capital formation is reduced due to inflation. High inflation can lead to an increase in pay claims as people look to protect their real incomes.

Due to inflation, there is a continuous fall in the value of the domestic currency. High inflation can lead to an increase in pay claims as people look to protect their real incomes.

Inflation increases black-marketing, theft, robbery, prostitution, and so on. It corrupts society. A fall in exports can trigger negative multiplier and accelerator effects on national income and employment.

Inflation brings political instability. High and volatile inflation is not good for business confidence partly because they cannot be sure of what their costs and prices are likely to be.v