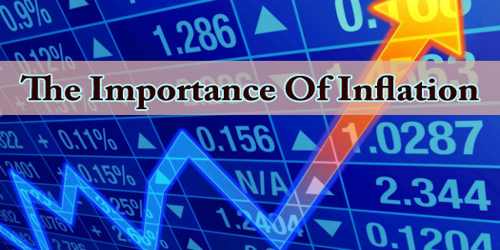 The Importance Of Inflation

Inflation essentially works as a stabilizing tool for the economy. Without a central bank being able to control the highs and lows of an economy, it would almost certainly end up spiraling out of control and crashes like the Great Depression would be inevitable.

Inflation can mean either an increase in the money supply or an increase in price levels. When we hear about inflation, we are hearing about a rise in prices compared to some benchmark. If the money supply has been increased, this will usually manifest itself in higher price levels it is simply a matter of time. For the sake of this discussion, we will consider inflation as measured by the core Consumer Price Index (CPI), which is the standard measurement of inflation used in the U.S. financial markets. Of more importance is the measurement of core inflation. Core CPI excludes food and energy from its formulas because these goods show more price volatility than the remainder of the CPI.

Inflation, the rate of increase in prices for goods and services, is one of the most important influences in economics and one of the government’s primary fiscal goals is to keep inflation at a controlled level. Inflation is caused by the demand for goods and services being higher than their supply, which over time gradually pushes prices up. If inflation is too low it indicates dropping consumer demand, usually the sign of a wider economic problem, and subsequently compounds that by encouraging individuals and business postpone purchases, harming sales figures.

It also increases the burden of debt as inflation goes some way to offsetting interest rates. However, if inflation is too high it moves faster than growth in incomes and the purchasing power of companies and individuals is impaired, which also has a harmful effect on economies. This is why central banks around the world target long term average interest rates of around 2%.

Why do prices go up and down, though?

There are countless reasons, but here are the main two:

There are a number of other reasons for prices to go up or down. Wars and natural disasters are two examples that can also cause inflation to rise.

How is the Inflation Rate Calculated?

Inflation rates can be calculated using different formulae but essentially look at the average price increase of a ‘basket’ of things we commonly spend money on such as fuel, staple foodstuffs, and widely consumed entertainment, such as cinema tickets. The most commonly quoted inflation indices are the Consumer Prices Index (CPI) and the Retail Prices Index (RPI). The main difference between the two is that the RPI also includes costs associated with housing such as rent levels, mortgage interest payments, and housing-specific taxes. CPI also takes into consideration that certain goods and services may be substituted by cheaper alternatives when their prices go up. While the ‘basket’ of goods and services used to calculate inflation varies from country to country, it will include tens of thousands of separate items to provide an accurate overall picture not unduly influenced by factors that might cause price increases in isolated items. Items are also weighted based on an assessment of how much we spend on them.

Keeping a close eye on inflation is most important for fixed-income investors, as future income streams must be discounted by inflation to determine how much value today’s money will have in the future.

For stock investors, inflation, whether real or anticipated, is what motivates us to take on the increased risk of investing in the stock market, in the hope of generating the highest real rates of return. Real returns (all of our stock market discussions should be pared down to this ultimate metric) are the returns on investment that are left after commissions, taxes, inflation, and all other frictional costs are taken into account. As long as inflation is moderate, the stock market provides the best chances for this compared to fixed income and cash.

However, it is valuable to re-expose ourselves to the underlying theories behind the numbers from time to time so that we can put our potential for investment returns into the proper perspective.