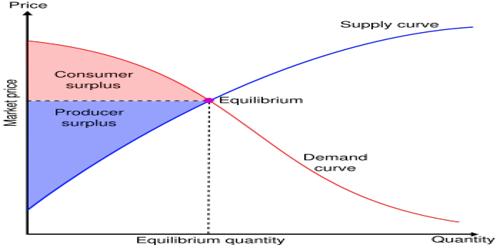 Consumer surplus is an extra amount which we feel as surplus of satisfaction. We as consumers give importance to this concept because we want to use any commodity to fulfill particular desire. The concept of consumer’s surplus has great practical importance, which are as follows:

Consumer’s surplus is useful to a finance minister in imposing taxes and fixing their rates. He will tax those commodities in which the consumers enjoying much surplus. In such cases, the people would be willing to pay more than they actually pay. Such tax will bring more revenue to the state. They will also mean comparatively less hardship than if taxes were imposed on commodities which do not yield much consumer’s surplus.

Importance to businessman and monopolist

The concept of consumer’s surplus is very useful to the businessman. He can raise price of those commodities in which there is a large consumer’s surplus. The seller will be able to raise price if he is monopolist and control the supply of the commodity. Monopoly producer should observe the psychology of consumer while determining the price of product. When they feel that consumers are ready to pay more they raise the price of goods and maximize their profit.

We can measure the benefit from international trade with the idea of consumer’s surplus. This concept is best for international trade. Goods which have large consumer surplus are imported than domestic production should be imported. The goods that have large consumer surplus in domestic production than import should not be imported. Suppose that before entering into trade with another country we are prepared to pay $ 1000 for a computer. But after establishing trade relation, we get it for $ 750. The difference between what we were prepared to pay for the computer and what we actually pay is the consumer’s surplus which measures the benefit from international trade.

Distinction between value in use and value in exchange

Finally, Consumer surplus is the difference of satisfaction we get by spending money but real satisfaction is more that is what we expect in daily life. And this shows this concept is important for feeling satisfied. Same is related with producer. A producer wants to earn maximum profit .When a producer finds total revenue is more than expected he feels extra satisfied to stay in that business.