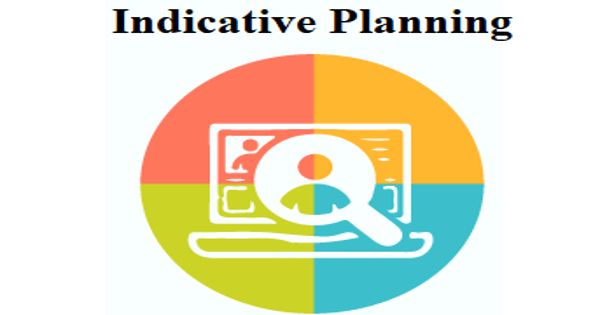 Indicative planning is an attempt to promote economic growth by influencing expectations. This planning attempts to combine the advantages of decentralization and central planning. It is a form of economic planning implemented by a state in an effort to solve the problem of imperfect information in market economies by coordination of private and public investment through forecasts and output targets. Socialist planning is then called imperative planning as the central planning authority performs all economic activities in the best interests of the society.

Indicative planning is a form of economic planning implemented by a state in an effort to solve the problem of imperfect information in market economies by coordination of private and public investment through forecasts and output targets.

Under imperative planning, there is the ab­sence of institutions of private property, com­petition and profit motive of industrialists, etc. The resulting plans aim to supply economically valuable information as a public good that the market by itself cannot disseminate, or where forward markets are nonexistent. It is because of the absence of these institu­tions and the presence of the state in directing and regulating economic activities, the plan­ning authority formulates and implements plans in the best interests of the country. However, indicative planning takes only endogenous market uncertainty into account, plans the economy accordingly, and does not look into exogenous uncertainty like technology, foreign trade, etc. Central planning would tell firms to invest, but this is thought to be too rigid. Under indicative planning, the government sets out to produce a set of forecasts of activity in various sectors, which if believed would persuade each firm that its own investments would be profitable. 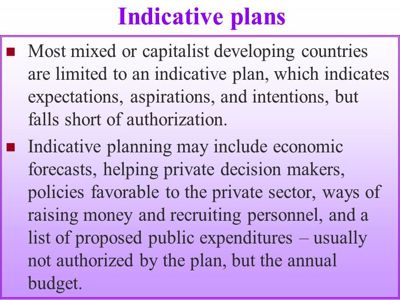 Indicative planning is contrasted with directive or mandatory planning, where a state (or other economic units) sets quotas and mandatory output requirements. Planning by inducement is often referred to as indicative planning. It is a perfect compromise a system between freedom and planning that enjoys the advantages of both the market and the planned economies, while successfully avoiding the disadvantages usually connected with these pure systems.