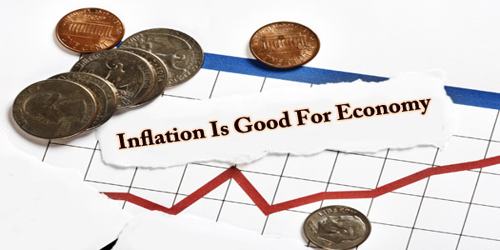 Inflation Is Good For Economy

Inflation is often used to describe the impact of rising oil or food prices on the economy. It is caused by the demand for goods and services being higher than their supply, which over time gradually pushes prices up. If inflation is too low it indicates dropping consumer demand, usually the sign of a wider economic problem, and subsequently compounds that by encouraging individuals and business postpone purchases, harming sales figures.

However, most economists consider the actual definition of inflation to be slightly different. Inflation is a function of the supply and demand for money, meaning that producing relatively more dollars causes each dollar to become less valuable, forcing the general price level to rise.

Inflation also increases the burden of debt as inflation goes some way to offsetting interest rates. However, if inflation is too high it moves faster than growth in incomes and the purchasing power of companies and individuals is impaired, which also has a harmful effect on economies. This is why central banks around the world target long term average interest rates of around 2%.

In common conversation, inflation is a broad increase in the prices associated with a constant amount of goods and services and it is typically spoken of as a negative factor. But like wind, price changes are always present. They become financially significant only when they become abnormally large, fast, or widespread.

Meanwhile, images of consumers toting wheelbarrows full of currency in places such as Germany in the 1920s and Argentina in the 1980s have etched the impact of rapidly rising prices on the public consciousness. But from an investment perspective, disinflation (when the pace of price increases slows down) and deflation (when the overall cost of living actually declines) can cause significant problems too. All such factors should be considered.

When Inflation Is Good –

When the economy is not running at capacity, meaning there is unused labor or resources, inflation theoretically helps increase production. More dollars translates to more spending, which equates to more aggregated demand. More demand, in turn, triggers more production to meet that demand.

British economist John Maynard Keynes believed that some inflation was necessary to prevent the Paradox of Thrift. This says, if consumer prices are allowed to fall consistently because the country is becoming too productive, consumers learn to hold off their purchases to wait for a better deal. The net effect of this paradox is to reduce aggregate demand, leading to less production, layoffs, and a faltering economy.

Inflation also makes it easier for debtors, who repay their loans with money that is less valuable than the money they borrowed. This encourages borrowing and lending, which again increases spending on all levels. Perhaps most important to the Federal Reserve is that the U.S. government is the largest debtor in the world, and inflation helps soften the blow of its massive debt.

Examples of Inflation: The housing industry provides an example of both inflation and deflation. Until 2006, gradually rising prices attracted investors. They saw there was a chance to make money by buying now and selling later. This created more jobs as home builders tried to meet demand.

But between 2006 and 2010, the housing market experienced massive deflation. Prices fell 30%. Those who could afford to buy a house decided to wait until the market improved. The longer they waited, the lower prices dropped.

Many people were trapped in their homes. They could not sell their homes for enough to cover the mortgages. They became upside-down. Eventually, they could not see any light at the end of the tunnel. Even those who could afford to keep paying, often just walked away. This sent prices even lower. Others were counting on being able to sell their home in a year or so. They were relying on this to cover a mortgage they could not afford. They foreclosed and lost their home when they were unable to cover their loan. This happened to so many people that there was a glut on the market.

Those who kept paying their loans had less money to spend on other things. This drove down demand in other sections of the economy. What did they get in return? An ever-deflating asset.

Inflation can change the flows of income and expense –

The impact of changes in price level on revenue depends on factors such as pricing flexibility, sales turnover, and pricing power. A company that relies mostly on large deals with multi-year revenue streams may have reduced opportunity to compensate for losses in its revenue purchasing power during the period of a contract. Conversely, it can reap unanticipated gains if the purchasing power of its future revenue were to increase.

A company that continually brings in new sales may be able to adjust its pricing more readily to respond to its customers’ purchasing power changes. Of course, while raising prices can promise increased revenue, any such discussion assumes that the company has the market power to increase its prices even if one or more of its competitors do not adjust their prices.

On the expense side of the ledger, the impact of changes in price level depends on factors such as the proportions of cash and accrual expenses and the amounts of inventory and work-in-process that may be carried from year to year.

A business that constantly buys raw materials at current prices could see the costs of goods sold respond relatively quickly to changes in the economy’s price level. A business that accrues large fractions of its costs by depreciating prior investments could see less immediate cost effects as older investments are consumed.

Products with short production cycles may see relatively little impact on the cost of any given unit. However, those with a multi-year production cycle may carry accrued costs that lag behind current price levels.