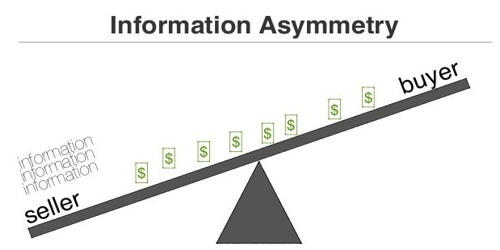 Information asymmetry extends to non-economic behavior. An economy is said to be characterized by information asymmetry when some parties to business transactions may have an information advantage over others. Accurate information is essential for sound economic decisions. When a market experiences an imbalance it can lead to market failure. As private firms have better information than regulators about the actions that they would take in the absence of regulation, the effectiveness of a regulation may be undermined. It starts the downward economic spiral for a firm. International relations theory has recognized that wars may be caused by asymmetric information and that “Most of the great wars of the modern era resulted from leaders miscalculating their prospects for victory”. A market failure is any scenario where an individual or firm’s pursuit of pure self-interest leads to inefficient results.

The concept of Asymmetric Information centers around a situation in which there is unequal knowledge between each party to a transaction, that one party has better information than the other party. There is asymmetric information between national leaders, wrote Jackson and Morelli, when there are differences “in what they know [i.e. believe] about each other’s armaments, quality of military personnel and tactics, determination, geography, political climate, or even just about the relative probability of different outcomes” or where they have “incomplete information about the motivations of other agents”. Information asymmetry is a very important concept because securities markets are subject to information asymmetry problems. It can lead to adverse selection, incomplete markets, and is a type of market failure.

Information asymmetries are studied in the context of principal-agent problems where they are a major cause of misinforming and are essential in every communication process. The theory was developed in the 1970s and 1980s as a plausible explanation for common phenomena that mainstream general equilibrium economics couldn’t explain. It is in contrast to perfect information, which is a key assumption in neoclassical economics. In 2001 the Nobel Memorial Prize in Economics was awarded to George Akerlof, Michael Spence, and Joseph E. Stiglitz for their “analyses of markets with asymmetric information”.