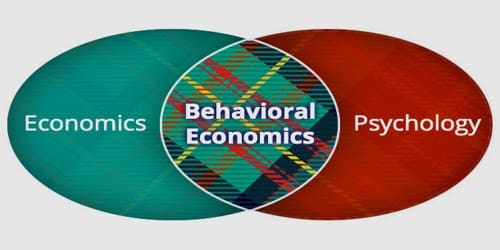 Behavioral economics provides a framework to understand when and how people make errors. Systematic errors or biases recur predictably in particular circumstances. It is a smaller part of economics that combines what we know about psychology with what we know about economics. Normally, economics does not consider the way humans actually think, but instead, simplifies decision-making to make economic models easier to understand.

It attempts to understand the effect of individual psychological processes, including emotions, norms, and habits on individual decision-making in a variety of economic contexts. Normally, economists assume people are rational, meaning they make good decisions at the right times using all information. In real life, people do not do this. Behavioral economists look at the world given problems and limitations that result when real humans are faced with decisions.

The assumption of the rational individual (‘economic man’ or homo economicus) is central to most micro-economic theory, and can be seen most clearly in marginal analysis.

The study of behavioral economics really began to develop in the middle and towards the end of the 20th century. Psychologists Amos Tversky and Daniel Kahneman wrote a paper called “Prospect Theory,” which was about how the way choices are presented to somebody is just as important as the choices themselves when an individual is making a decision. Later, Hersh Shefrin and Richard Thaler created a savings model which explains how people do not figure out how much to save and spend to stay at a constant level.

Behavioral economics attempts to integrate psychologists’ understanding of human behavior into economic analysis. In this respect, behavioral economics parallels cognitive psychology, which attempts to guide individuals toward more healthy behaviors by correcting cognitive and emotional barriers to the pursuit of genuine self-interest (Lowenstein, and Haisley, 2008).

Behavioural economics challenges the long held view in mainstream economics that individuals are ‘unemotional’ maximisers who make rational decisions – rational actors being identified as homo economicus. It also offers suggestions as to how individuals can be ‘nudged’ towards more effective decision-making.

Some psychologists argue that while behavioral economics is a step in the right direction in explaining why people act they way that they do, it is still far behind in research. They feel that it just changed traditional neoclassical economic theory, when they need to look deeper as to what is actually going on a more psychological and intellectual level.