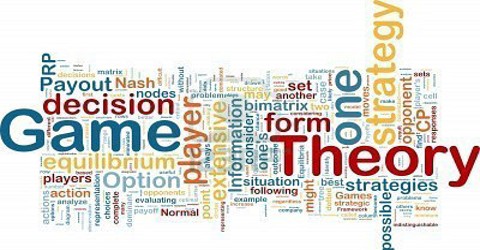 Game Theory is an economical term. It is actually brought about a revolution in economics by addressing crucial problems in prior mathematical economic models. For instance, neoclassical economics struggled to understand entrepreneurial anticipation and couldn’t handle imperfect competition. Game theory turned attention away from steady-state equilibrium and toward market process. Game theory is mainly used in economics, political science, and psychology, as well as logic, computer science and biology. Originally, it addressed zero-sum games, in which one person’s gains result in losses for the other participants. Decision Theory can be viewed as a theory of one person games, or a game of a single player against nature. The focus is on preferences and the formation of beliefs. The most widely used form of decision theory argues that preferences among risky alternatives can be described by the maximization of the expected value of a numerical utility function, where utility may depend on a number of things, but in situations of interest to economists often depends on money income. Decision theory is often used in the form of decision analysis, which shows how best to acquire information before making a decision.

General Equilibrium Theory can be viewed as a specialized branch of game theory that deals with trade and production, and typically with a relatively large number of individual consumers and producers. It is widely used in the macroeconomic analysis of broad based economic policies such as monetary or tax policy, in finance to analyze stock markets, to study interest and exchange rates and other prices.

Mechanism Design Theory differs from game theory in that game theory takes the rules of the game as given, while mechanism design theory asks about the consequences of different types of rules. Naturally this relies heavily on game theory. Questions addressed by mechanism design theory include the design of compensation and wage agreements that effectively spread risk while maintaining incentives, and the design of auctions to maximize revenue, or achieve other goals. There are two main branches of game theory: Cooperative and Noncooperative Game Theory. Game Theory provides many insights into the behaviour of oligopolists. For example, it indicates that generating rules for behaviour may take some of the risks out of competition, such as:

In 2005, game theorists Thomas Schelling and Robert Aumann followed Nash, Selten and Harsanyi as Nobel Laureates. Schelling worked on dynamic models, early examples of evolutionary game theory. Aumann contributed more to the equilibrium school, introducing an equilibrium coarsening, correlated equilibrium, and developing an extensive formal analysis of the assumption of common knowledge and of its consequences.