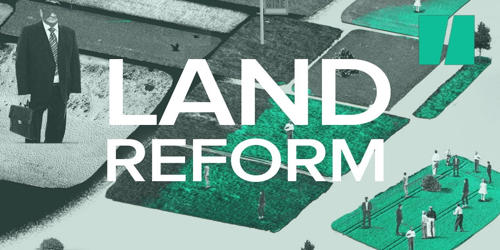 Land reform involves the changing of laws, regulations, or customs regarding land ownership. It may consist of a government-initiated or government-backed property redistribution, generally of agricultural land. The concept of land reform has varied over time according to the range of functions which land itself has performed: as a factor of production, a store of value and wealth, a status symbol, or a source of social and political influence. The goals of land reform are multifold: reducing poverty, expanding rural development, or returning land to its previous owners.

Land reform can, therefore, refer to transfer of ownership from the more powerful to the less powerful, such as from a relatively small number of wealthy owners with extensive land holdings (e.g., plantations, large ranches, or agribusiness plots) to individual ownership by those who work the land. Such transfers of ownership may be with or without compensation; compensation may vary from token amounts to the full value of the land. Land value reflects its relative scarcity, which is a market economy that usually depends on the ratio between the area of usable land and the size of that area’s population.

Main objectives of land reform are:

Land reform a purposive change in the way in which agricultural land is held or owned, the methods of cultivation that are employed, or the relation of agriculture to the rest of the economy. The common characteristic of all land reforms, however, is modification or replacement of existing institutional arrangements governing possession and use of land. Reforms such as these may be proclaimed by a government, by interested groups, or by revolution. Thus, while land reform may be radical in nature, such as through large-scale transfers of land from one group to another, it can also be less dramatic, such as regulatory reforms aimed at improving land administration. The most common type of reform involves the redistribution of land titles from one individual to another, from individuals to a group or community at large, or from a group to individuals.

Reform is usually introduced by government initiative or in response to internal and external pressures, to resolve or prevent an economic, social, or political crisis. It constitutes the most important package of measures to improve the economic con­dition of agricultural tenants. Nonetheless, any revision or reform of a country’s land laws can still be an intensely political process, as reforming land policies serves to change relationships within and between communities, as well as between communities and the state. Thus even small-scale land reforms and legal modifications may be subject to intense debate or conflict. Simply, it is the breaking up of large pieces of agricultural land to be given to small farmers.