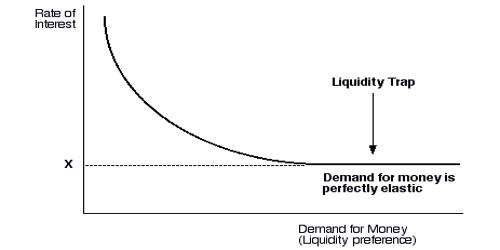 The liquidity trap is the extreme effect of monetary policy. It is a situation in which the general public is prepared to hold on to whatever amount of money is supplied, at a given rate of interest. It is a situation, described in Keynesian economics, in which, “after the rate of interest has fallen to a certain level, liquidity preference may become virtually absolute in the sense that almost everyone prefers holding cash rather than holding a debt which yields so low a rate of interest.” It is is a contradictory economic situation in which interest rates are very low and savings rates are high, rendering monetary policy ineffective.

A liquidity trap is caused when people hoard cash because they expect an adverse event such as deflation, insufficient aggregate demand, or war. While a liquidity trap is a function of economic conditions, it is also psychological since consumers are making a choice to hoard cash instead of choosing higher-paying investments because of a negative economic view. According to mainstream theory, among the characteristics of a liquidity trap are interest rates that are close to zero and changes in the money supply that fail to translate into changes in the price level. 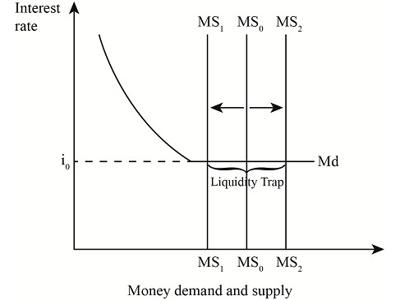 The concept of liquidity trap was first developed by economists J.M Keynes and J.H. Hicks in 1937, as an economic condition first observed after the Great Depression of the 1930s. Modern Monetary Theorist argues we should target a higher inflation rate, increase inflation expectations, and increase the money supply – putting cash into households’ hands directly if necessary. A feature of a liquidity trap is that increasing the money supply has little effect on boosting demand. It occurs when a period of very low-interest rates and a high amount of cash balances held by households and businesses fails to stimulate aggregate demand.

A liquidity trap is characterized by –

A liquidity trap isn’t limited to bonds. It also affects other areas of the economy, as consumers are spending less on products which means businesses are less likely to hire. It is a situation when expansionary monetary policy does not increase the interest rate, income and hence does not stimulate economic growth. There is a liquidity trap at short term zero percent interest rate. When interest rate is zero, the public would not want to hold any bond, since money, which also pays zero percent interest, has the advantage of being usable in transactions.