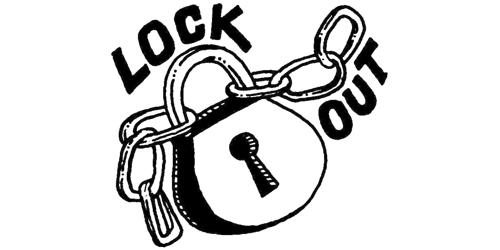 Lock Out is the withholding of employment by an employer and the whole or partial closing of the business establishment in order to gain concessions from or resist the demands of employees. It means temporary shutdown of the factory by the employer, but not winding up (permanent) of the factory.  It is a mechanism by which an employee locks out the business premises in order to prevent the entry of laborers, at the time of a dispute between an employer and the workforces. The company locked out the workers, and then the rest of the workforce went on strike.

A lockout is a situation in which employers close a place of work and prevent workers from entering it until the workers accept the employer’s new proposals on pay or conditions of work. It is the tactic of withholding employment, typically used by employers to hinder union organization or to gain leverage in labor disputes. The opposite of a “lockout” is a “strike”, which occurs when employees refuse to work. It is often accomplished by literally locking employees out of the workplace, but it can also be achieved through work stoppage, layoffs, or the hiring of nonunion replacement workers. Similar to a “lockout”, a “strike” will cause great harm to a business, especially if it lasts for a lengthy period of time.

Lockout of the factory may be happened due to the failure in the management affected by internal disturbances or maybe by external disturbances. In an industrial dispute, if a company locks its workers out, it closes the factory or office in order to prevent the employees from coming to work. It is a work stoppage or denial of employment initiated by the management of a company during a labor dispute. Sometimes factory lockouts may be caused by external influences, such as unnecessary political parties involved in the management of workers union may be provoked for unjustified demands that may be unaffordable by the management, which may ultimately lead to the lockout of the factory.

A lockout is generally an attempt to enforce specific terms of employment upon a group of employees during a dispute. If a company locks out its workers, it closes their place of work so that they cannot go to work until they agree to the employer’s conditions. It is often used to force unionized workers to accept new conditions, such as lower wages. If the union is asking for higher wages, better benefits, or maintaining benefits, a manager may use the threat of a lockout – or an actual lockout – to convince the union to back down. It is the temporary closing of a business or the refusal by an employer to allow employees to come to work until they accept the employer’s terms.