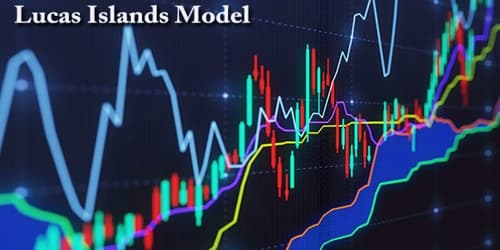 The Lucas-Islands model is an economic model formulated by Robert Lucas, Jr. It is an economic model of the link between money supply and price and output changes in a simplified economy using rational expectations. It delivered a new classical explanation of the Phillips curve relationship between unemployment and inflation.

There exist N islands. On each island is a producer who charges price pt(z), where z denotes a particular island. We shall denote the aggregate price as pt, which is simply the average of p(z) across all Z islands.

so that a producer increases his output when his own price is greater than the aggregate price in the economy. This the output is given by a standard upward sloping supply schedule. y(z) should be interpreted as deviations in output from the trend, so that when y(z)=0 output is equal to its trend value. The innovation in this model is to assume imperfect information so that a producer on an island knows at time t his own price p(z) but does not know the economy-wide price level p. Instead, they have to form a guess of p based on the information at their disposal. Let It(z) denote the information available at time t to the producer in market z. Then E(pt |It(z) ) denotes the expectation of the aggregate price pt given the information available to the producer in island z.

Although economic agents are expected to respond to changes in the price level, the central bank is not able to control the real economy. Since erratic changes may occur in the macroeconomic environment (interpreted as white noises) and agents are assumed to be fully rational, controlling the real economy (unemployment and production) is possible only through surprises (or, in other words, unexpected monetary policy actions) which, however, cannot be systematic.