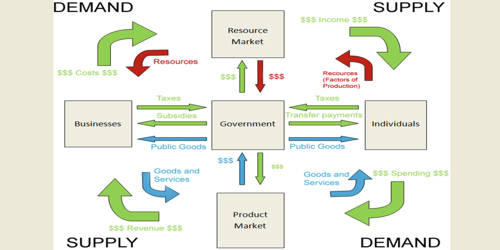 A macroeconomic model is an analytical tool designed to describe the operation of the problems of the economy of a country or a region. They are typically populated by a large number of identical worker-consumers, who supply labor along the intensive margin in a spot market. These models are usually designed to examine the comparative statics and dynamics of aggregate quantities such as the total amount of goods and services produced, total income earned, the level of employment of productive resources, and the level of prices. If the world were as simple as the model, “the wage” would be easy to measure. Their failure to predict the recent financial crisis does not negate their use, it only points to some areas that can be improved.

Thus, macroeconomic models are widely used in academia in teaching and research and are also widely used by international organizations, national governments, and larger corporations, as well as by economic consultants and think tanks. Such models have also become indispensable tools for monetary policymakers, useful both for forecasting and comparing different policy options. Models can be used to test different theories, for example, and they require forecasters to clearly spell out their underlying hypotheses. For better or worse, macroeconomic modeling is playing an ever-larger role in policy assessments.