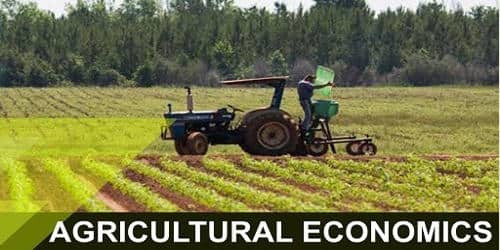 Agricultural economics plays a role in the economics of development, for a continuous level of farm surplus is one of the wellsprings of technological and commercial growth. It is an applied field of economics concerned with the application of economic theory in optimizing the production and distribution of food and fiber. Agricultural economics began as a branch of economics that specifically dealt with land usage, it focused on maximizing the crop yield while maintaining a good soil ecosystem. It does not study only the behavior of a farmer at the farm level. That is, in a way, the microanalysis. Throughout the 20th century, the discipline expanded and the current scope of the discipline is much broader.

While at one time, the field of agricultural economics was focused primarily on farm-level issues, in recent years agricultural economists have studied diverse topics related to the economics of food consumption. In addition to economists’ long-standing emphasis on the effects of prices and incomes, researchers in this field have studied how information and quality attributes influence consumer behavior.

Agricultural economics research has addressed diminishing returns in agricultural production, as well as farmers’ costs and supply responses. Much research has applied economic theory to farm-level decisions. Studies of risk and decision-making under uncertainty have real-world applications to crop insurance policies and to understand how farmers in developing countries make choices about technology adoption.

Development economics is broadly concerned with the improvement of living conditions in low-income countries, and the improvement of economic performance in low-income settings. Many agricultural economists are interested in the food systems of developing economies, the linkages between agriculture and nutrition, and the ways in which agriculture interacts with other domains, such as the natural environment