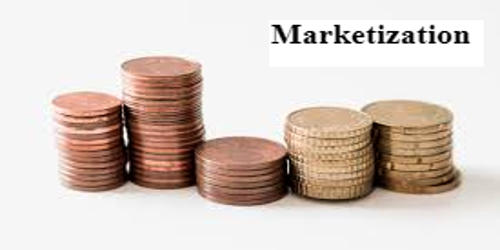 Marketization is the act or process of entering into, participating in, or introducing a free market economy. It is the process that enables the state-owned enterprises to act like market-oriented firms. It is a restructuring process that enables state enterprises to operate as market-oriented firms by changing the legal environment in which they operate. This is achieved through reduction of state subsidies, deregulation, organizational restructuring, decentralization, and in some cases privatization. It is the exposure of an industry or service to market forces. In its broadest usage, the term marketization refers to the process of transforming an entire economy away from a planned economic system and toward the greater market-based organization. It refers to the integration of competition and price mechanisms into public services. The most dramatic type of marketization is privatization.

Marketization is the conversion of an economy to a market economy. It is the broad concept under which privatization and commercialization present themselves as logical solutions to ongoing challenges in the provision of education services. This is achieved through the reduction of state subsidies, organizational restructuring of management (corporatization), decentralization, and in some cases partial privatization. Privatization occurs when the state completely abandons the production of a good or the provision of the service by handing it over to the private sector.

Indeed, marketization requires more market and less state; more individual responsibility and less welfare provision; and more focus on the individual and less on the common good. These steps, it is argued, will lead to the creation of a functioning market system by converting the previous state enterprises to operate under market pressures as state-owned commercial enterprises. This market logic explains the shift from top-down, hierarchical education structures to networked structures where governments redefine themselves as facilitators. It is the conversion of an economy to a market economy.

Marketization is used to refer to a trend in education policy from the 1980s where schools were encouraged to compete against each other and act more like private businesses rather than institutions under the control of the local government. It refers simply to the introduction of market forces in education, where governments have created policy conditions that promote the development of quasi-markets in state-funded and/or state-provided services. A key aspect of this facilitation is managing contracts between the state and private sector organizations that steer education policy, develop curriculum and assessment, and operate schools. It is noted that marketization moves all assume that the public wants the services in question, but seek more choice and better quality.