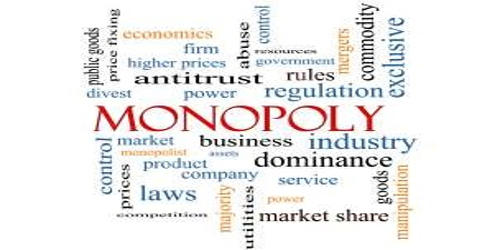 A monopoly means the sole power of dealing with any commodity. It refers to when a company and its product offerings dominate a sector or industry. It is the exclusive possession or control of the supply of or trade in a commodity or service. It signifies an exclusive right secured by one or more persons to carry on some business. The term monopoly is often used to describe an entity that has total or near-total control of a market. If a company, person, or state has a monopoly on something such as an industry, they have complete control over it, so that it is impossible for others to become involved in it.

A market structure characterized by a single seller, selling a unique product in the market. Monopolies typically have an unfair advantage over their competition since they are either the only provider of a product or control most of the market share or customers for their product. In a monopoly market, the seller faces no competition, as he is the sole seller of goods with no close substitute. Monopoly power is the extent to which a firm can influence and even ‘set’ the market price or influence the quantity supplied to the market, and also the extent to which conditions of business are influenced by a single firm.

In a monopoly market, factors like government license, ownership of resources, copyright and patent, and high starting cost make an entity a single seller of goods. Monopolies can be considered an extreme result of free-market capitalism and are often used to describe an entity that has total or near-total control of a market. All these factors restrict the entry of other sellers in the market. Monopolies also possess some information that is not known to other sellers. Natural monopolies can exist when there are high barriers to entry; a company has a patent on their products or is allowed by governments to provide essential services.

Monopolies arise because of:

(1) A key resource is owned by the firm. For example, Debeers and diamonds.

(2) The government gives a firm the exclusive right to produce a good. Examples include – Proposition 3 on slot machine gambling, patents on new drugs, copyrights on software and books. Some government monopolies are the result of special interests and corruption, some enhance efficiency by encouraging innovation.

(3) The costs of production make one producer more efficient than many, due to increasing returns to scale–“natural monopoly.” Examples include – Columbia Gas, American Electric Power, a toll bridge across a river.