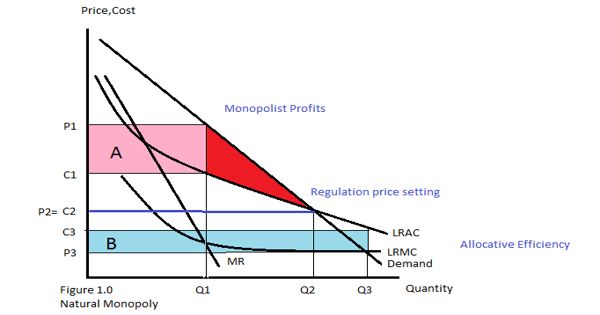 Natural Monopoly – a monopoly in an industry

A natural monopoly is a type of monopoly that exists due to the high start-up costs or powerful economies of scale of conducting a business in a specific industry. It is a monopoly in an industry in which high infrastructural costs and other barriers to entry relative to the size of the market give the largest supplier in an industry, often the first supplier in a market, an overwhelming advantage over potential competitors. A company with a natural monopoly might be the only provider or a product or service in an industry or geographic location.

A natural monopoly is a type of monopoly that arises due to natural market forces. It occurs when the most efficient number of firms in the industry is one. It occurs when a firm enjoys extensive economies of scale in its production process.

An example of a natural monopoly is tap water. It makes sense to have just one company providing a network of water pipes and sewers because there are very high capital costs involved in setting up a national network of pipes and sewage systems. Examples include – Gas networks, Electricity grid, Railway infrastructure, National fiber-optic broadband network, etc. 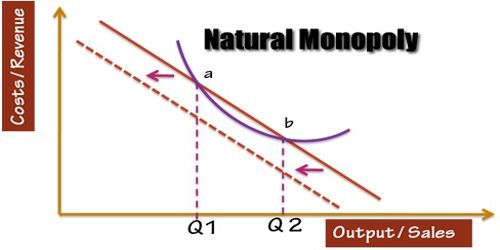 Natural monopolies can arise in industries that require unique raw materials, technology, or similar factors to operate. This frequently occurs in industries where capital costs predominate, creating economies of scale that are large in relation to the size of the market; examples include public utilities such as water services and electricity. Natural monopolies are allowed when a single company can supply a product or service at a lower cost than any potential competitor, and at a volume that can service an entire market.

The properties of a natural monopoly are as follows:

A natural monopoly will typically have very high fixed costs meaning that it is impractical to have more than one firm producing the good. Natural monopolies were recognized as potential sources of market failure as early as the 19th century; John Stuart Mill advocated government regulation to make them serve the public good. Therefore, natural monopolies often need government regulation. For example, OFWAT and OFGEM regulate the water and energy markets respectively.