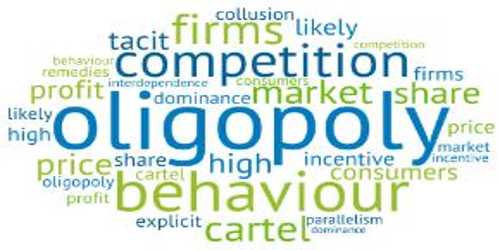 Oligopoly is a common market form. As a quantitative description of oligopoly, the four-firm concentration ratio is often utilized. Oligopolistic competition can give rise to a wide range of different outcomes. In some situations, the firms may employ restrictive trade practices (collusion, market sharing etc.) to raise prices and restrict production in much the same way as a monopoly. Where there is a formal agreement for such collusion, this is known as a cartel. A primary example of such a cartel is OPEC which has a profound influence on the international price of oil.

Firms often collude in an attempt to stabilize unstable markets, so as to reduce the risks inherent in these markets for investment and product development. There are legal restrictions on such collusion in most countries. There does not have to be a formal agreement for collusion to take place (although for the act to be illegal there must be actual communication between companies)–for example, in some industries there may be an acknowledged market leader which informally sets prices to which other producers respond, known as price leadership.

Thus the welfare analysis of oligopolies is sensitive to the parameter values used to define the market’s structure. In particular, the level of dead weight loss is hard to measure. The study of product differentiation indicates that oligopolies might also create excessive levels of differentiation in order to stifle competition.

Oligopoly theory makes heavy use of game theory to model the behavior of oligopolies: Ability to set price: Oligopolies are price setters rather than price takers.

Entry and exit: Barriers to entry are high. The most important barriers are economies of scale, patents, access to expensive and complex technology, and strategic actions by incumbent firms designed to discourage or destroy nascent firms. Additional sources of barriers to entry often result from government regulation favoring existing firms making it difficult for new firms to enter the market.

Product differentiation: Product may be homogeneous (steel) or differentiated (automobiles).

Interdependence: The distinctive feature of an oligopoly is interdependence. Oligopolies are typically composed of a few large firms. Each firm is so large that its actions affect market conditions. Therefore the competing firms will be aware of a firm’s market actions and will respond appropriately. This means that in contemplating a market action, a firm must take into consideration the possible reactions of all competing firms and the firm’s countermoves. It is very much like a game of chess or pool in which a player must anticipate a whole sequence of moves and countermoves in determining how to achieve his objectives. For example, an oligopoly considering a price reduction may wish to estimate the likelihood that competing firms would also lower their prices and possibly trigger a ruinous price war. Or if the firm is considering a price increase, it may want to know whether other firms will also increase prices or hold existing prices constant. This high degree of interdependence and need to be aware of what the other guy is doing or might do is to be contrasted with lack of interdependence in other market structures. In a PC market there is zero interdependence because no firm is large enough to affect market price. All firms in a PC market are price takers, information which they robotically follow in maximizing profits. In a monopoly there are no competitors to be concerned about. In a monopolistically competitive market each firm’s effects on market conditions is so negligible as to be safely ignored by competitors.

In industrialized economies, barriers to entry have resulted in oligopolies forming in many sectors, with unprecedented levels of competition fueled by increasing globalization. Market shares in an oligopoly are typically determined by product development and advertising. For example, there are now only a small number of manufacturers of civil passenger aircraft, though Brazil (Embraer) and Canada (Bombardier) have participated in the small passenger aircraft market sector. Oligopolies have also arisen in heavily-regulated markets such as wireless communications: in some areas only two or three providers are licensed to operate.