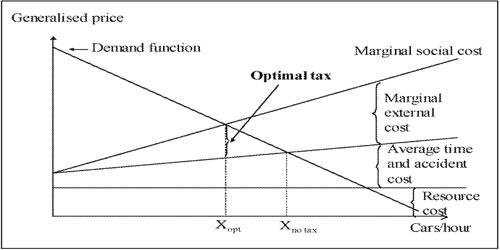 Optimal tax theory or the theory of optimal taxation is the study of designing and implementing a tax that maximises a social welfare function subject to economic constraints. Optimal taxation is the taxation that reflects society’s choices between the rival goals of equality and economic efficiency, the starting point of which is to maximize social welfare. The optimal design of a tax system is a topic that has long fascinated economic theorists and flummoxed economic policymakers. The social welfare function used is typically a function of individuals’ utilities, most commonly some form of utilitarian function, so the tax system is chosen to maximize the aggregate of individual utilities. An important strand of the literature on optimal taxation in dynamic economies concerns the proposition that the income tax rate on income from capital should be zero. A central issue in public economics is the appropriate design of a tax system.

The standard theory of optimal taxation posits that a tax system should be chosen to maximize a social welfare function subject to a set of constraints. Tax revenue is required to fund the provision of public goods and other government services, as well as for redistribution from rich to poor individuals. The literature on optimal taxation typically treats the social planner as a utilitarian: that is, the social welfare function is based on the utilities of individuals in society. However, most taxes distort individual behavior, because the activity that is taxed becomes relatively less desirable; for instance, taxes on labor income reduce the incentive to work. In the long run, a tax on capital income discourages capital accumulation resulting in a reduction in the capital-labor ratio and the wage rate. Accordingly, the optimal policy is to have a zero tax on income from capital in the long run. Under the assumption that consumers are similar, it is argued that the taxation of luxury goods at a lower rate than necessity goods will have a negative effect on tax justice.

The optimization problem involves minimizing the distortions caused by taxation while achieving desired levels of redistribution and revenue. The criticism of this rule is due to the fact that essential goods to meet basic needs have a low price elasticity of demand, while luxury goods have high price elasticity. Some taxes are thought to be less distorting, such as lump-sum taxes (where individuals cannot change their behavior to reduce their tax burden) and Pigouvian taxes, where the market consumption of a good is inefficient and a tax brings consumption closer to the efficient level. The optimal tax systems perspective is shown to shed light on the choice of tax instruments, the problem of tax evasion, and the appropriate tax treatment of capital income.