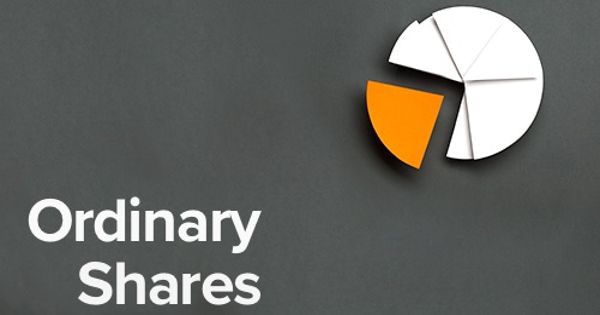 Ordinary Shares or Common Stock represents shares of ownership in a corporation and the type of stock in which most people invest. This is a type of security that represents ownership of equity in a company. Shares that carry no preferential or special rights in respect of annual dividends and in the repayment of capital at the time of liquidation of the company are called equity shares. These are stocks sold on a public exchange. These shares carry no preferential rights; therefore, these are also known as common stock or ordinary shares. Each share of stock generally gives its owner the right to one vote at a company shareholders’ meeting. Voting rights mean you have a say on issues such as salaries and the future direction of the business.

Ordinary or common shares are generally issued in the stock market to raise capital for the company. These shares provide investors with voting rights (one vote per share) and represent proportionate ownership of a company.

An ordinary share represents a fraction of ownership in the corporation that issues it. Dividend on such shares is payable only when there are profits after the payment of the preference dividend. As an owner, the shareholder gets a vote in the company’s major decisions, decided at its shareholder meetings. But, the rate of dividend on these shares is not fixed. Board of directors, depending upon the dividend policy as well as the availability of profits after dividend on preference shares, declare a dividend. The company’s board of directors decides whether a dividend will be awarded, and how much it will be.

Ordinary shares are shares in a company that are owned by people who have a right to vote at the company’s meetings and to receive part of the company’s profits after the holders of preference shares have been paid. No dividend will be paid on these shares, if there are no profits or insufficient profits in a particular year. The dividend represents the stock owner’s share of the profits of the corporation over the past quarter or year.

The value of these shares in stock exchange fluctuates on the basis of rate of dividend declared. Ordinary stock shareholders receive fluctuating dividend payments depending on a company’s performance. Similarly, these shares are redeemed only after the redemption of preference shares at the time of liquidation of the company. Despite the high financial risk, ordinary shareholders are rewarded greater when compared to preferred shareholders.