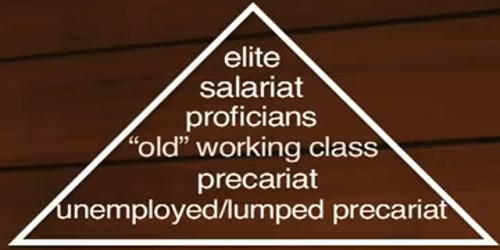 The world economy is in the midst of a Global Transformation that is producing a new global class structure. In sociology and economics, the precariat is a social class formed by people suffering from precarity, which is a condition of existence without predictability or security, affecting material or psychological welfare. We are in the middle of a global transformation, the painful construction of a global market economy. The term is a portmanteau obtained by merging precariously with the proletariat. This is useful in terms of images and analyses, and it allows us to use what Max Weber called an “ideal type”. In the initial period dominated by financiers and rent-seekers, a new global class has taken shape: the precariat. Unlike the proletariat class of industrial workers in the 20th century who lacked their own means of production and hence sold their labor to live, members of the precariat are only partially involved in labor and must undertake extensive “unremunerated activities that are essential if they are to retain access to jobs and to decent earnings”. This was intensified by labor flexibility policies and the silicon revolution that facilitated the relocation of production and employment to where costs were lowest. Another unique feature is that the precariat must do much work-for-labor that is neither recognized nor remunerated.

The social democratic consensus of the immediate postwar years has given way to a new phase of capitalism that is leaving workers further behind and reshaping the class structure.  To realize that potential, however, the precariat must awaken to its status as a class and fight for a radically changed income distribution that reclaims the commons and guarantees a livable income for all. Classic examples of such unpaid activities include continually having to search for work (including preparing for and attending job interviews), as well as being expected to be perpetually responsive to calls for “gig” work (yet without being paid an actual wage for being “on-call”). It relies largely on money wages, without non-wage benefits, rights-based state benefits, or informal community benefits.

The emergence of the precariat is thought to be a direct result of employment policies in our modern, global economy. The hallmark of the precariat class is the condition of lack of job security, including intermittent employment or underemployment and the resultant precarious existence. All this shaped a global class structure superimposed on old national structures. The emergence of this class has been ascribed to the entrenchment of neoliberal capitalism. So, the precariat is exploited off workplaces and outside labor time as well as in workplaces and in labor time.