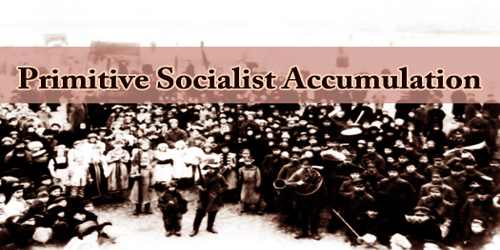 Primitive Socialist Accumulation, sometimes referred to as the socialist accumulation, was a concept developed by the Soviet economist Yevgeny Preobrazhensky to analyze the New Economic Policy (NEP) of the 1920s. It was developed as a counterpart to the process of the primitive accumulation of capital that took place during the early stages and development of capitalist economies. Because the Soviet economy was underdeveloped and largely agrarian in nature, the Soviet Union would have to be the agent of primitive capital accumulation to rapidly develop the economy. The concept was proposed as a means to industrialize the Russian economy through state capitalism because it was too underdeveloped to implement socialism at the time.

Adam Smith and other classical economists referred to “previous” or “primitive” accumulation of capital to explain the rise of specialization of production and the division of labor. Specialized production required the prior accumulation of capital to support specialized workers until their products were ready for sale. Previous accumulation occurred through saving, and the return to capital represented the reward for saving. Karl Marx parodied this self-congratulatory thesis, arguing instead that primitive capitalist accumulation represented no more than “divorcing the producer (i.e., labor) from the means of production.” It was the process of creating the necessary capitalist institutions: private monopoly ownership of the means of production and wage labor.

The major proponent of the concept was Yevgeni Preobrazhensky in his 1926 work The New Economics which was based on his 1924 lecture in the Communist Academy, titled The Fundamental Law of Socialist Accumulation. The concept was proposed during the period of the New Economic Policy. Its main principle is that the state sector of the economy of the transitional period has to appropriate the peasant’s surplus product to accumulate resources necessary for the growth of the industry. To this end, the major mechanisms were the foreign trade monopoly held by the state and price control in favor of industry which in effect caused price scissors.

This theory was criticized politically and associated with Leon Trotsky and the Left Opposition, but it was in fact put into practice by Joseph Stalin in the 1930s as when Stalin said in his speech to The Captains of Industry that the Soviet Union had to accomplish in a decade what England had taken centuries to do in terms of economic development in order to be prepared for an invasion from the West.

For Preobrazhensky; this process was not to be merely a means of achieving industrialization, but was also considered an integral part of the development of a socialist state. He states: “As it develops, the law of primitive socialist accumulation simultaneously begins to resolve both the problems of proportionality in the distribution of existing productive forces…and the problem of expanded reproduction, but in socialist rather than capitalist forms (Preobrazhensky, 1979, page 67).” Thus, primitive socialist accumulation was seen as the means by which the state could supplant petty-bourgeois production and capitalist relations within the economy.

As for capitalist accumulation, the force would need to be the agent of primitive socialist accumulation, and it was to be applied by the revolutionary socialist state in the form of tax, price, and financial policies to expropriate the surplus value created in the private sector and transfer it to the socialist sector, thereby guaranteeing its differential growth. Under what he called “premature socialist conditions” that characterized the USSR, Preobrazhensky recommended nonequivalent exchange, that is, the turning of the terms of trade against the peasantry and other private enterprises, as the main means to collect and transfer the surplus. During the transition, workers in socialist enterprises would experience “self-exploitation.” Over time, therefore, the primitive socialist accumulation would eliminate the private sector.

At the heart of Preobrazhensky’s belief that the socialist sector must accumulate resources at the expense of the private sector was his argument that the scale of the expropriation must depend on the antagonistic interplay of two laws: the law of primitive socialist accumulation and the law of value. The law of value, which governs the economy through a spontaneous expression of market forces, was to be replaced by planning and by the law of primitive socialist accumulation. The content of market relations would be removed thereby, and these relations come under the control of the state.

Preobrazhensky emphasized that one law must oust the other, and either the capitalist form will erode the state economy or the socialist form will develop at the expense of the non-socialist milieu. The idea that the two types of an economy cannot exist side by side followed from Marx’s statement that capital “can be understood only as motion, not as a thing at rest (Marx, 1967b, page 105).” For socialism to succeed in Russia, the growth of the socialist sector had to outstrip that of the capitalist sector. There could be no long-run equilibrium between the two, where neither of the economic systems exploits the other.

Beyond lectures and textbooks, this theory affected the working class as well. Real wages for both regular workers and managers plummeted despite the growing wage differential. Piece work production relations were introduced wholesale. The soviet penal policy also tightened, causing a significant growth of inmates in the Gulag. It was not until after Stalin’s death that a minimum wage was introduced, reductions to piece work production relations were made and mass rehabilitation resulted in the dissolution of most of the Gulag.

Although the concept appears to be consistent with Marx’s use of it in the analysis of capitalism, Preobrazhensky’s theory was roundly criticized by Nikolai Bukharin and other Bolshevik theorists, probably because he used the term “exploitation” in prescribing a socialist economic policy.