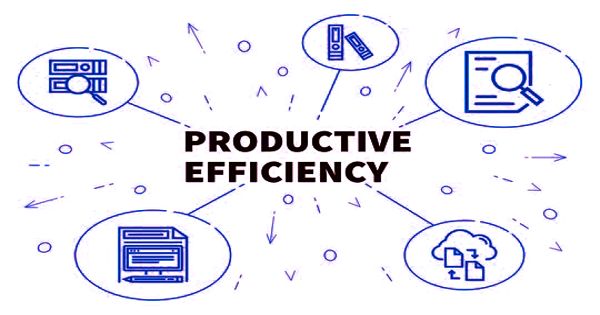 Productive efficiency is concerned with producing goods and services with the optimal combination of inputs to produce maximum output for the minimum cost. It is also known as, production efficiency is a situation in which the economy or an economic system (e.g., a firm, a bank, a hospital, an industry, a country, etc.) could not produce any more of one good without sacrificing production of another good and without improving the production technology. This similarly means that an entity is operating at maximum capacity. In other words, productive efficiency occurs when a good or service is produced at the lowest possible cost. It is concerned with the optimal method of producing goods; producing goods at the lowest cost.

Production efficiency is an economic term describing a level at which an economy or entity can no longer produce additional amounts of a good without lowering the production level of another product.

The concept of economic production efficiency centers around the charting of a production possibility frontier. In simple terms, the concept is illustrated on a production possibility frontier (PPF), where all points on the curve are points of productive efficiency. It is closely related to the concept of technical efficiency. An equilibrium may be productively efficient without being allocatively efficient— i.e. it may result in a distribution of goods where social welfare is not maximized. It is one type of economic efficiency. A firm is technically efficient when it combines the optimal combination of labor and capital to produce a good. i.e. cannot produce more of a good, without more inputs. 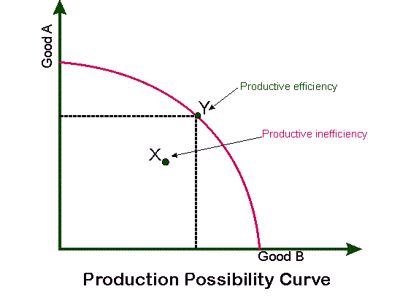 Allocative efficiency is concerned with the optimal distribution of resources. The output of productive efficiency occurs when a business in a given market or industry reaches the lowest point of its average cost curve implying an efficient use of scarce resources and a high level of factor productivity. Productive efficiency of an industry requires that all firms operate using best-practice technological and managerial processes and that there is no further reallocation that brings more output with the same inputs and the same production technology. It is concerned with the optimal distribution of goods and services. For example, if you devoted 90% of GDP to defense, you could be productively efficient, but, this would be a very unbalanced economy.