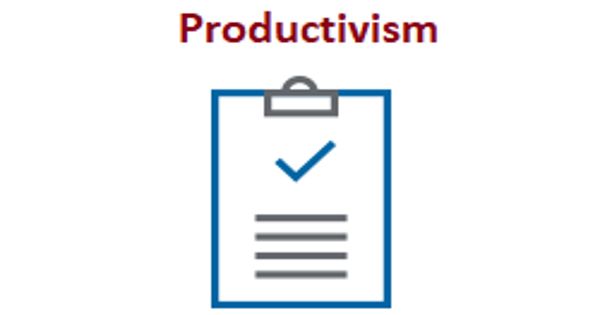 Productivism – a belief that measurable productivity and growth

Productivism is a doctrine or theory that increasing productivity is the primary goal of socio-economic activity. It is also known as, growthism is the belief that measurable productivity and growth are the purpose of human organization (e.g., work), and that “more production is necessarily good”. Productivism is that which would subsume reproduction within the sphere of production, insisting that the costs of the employment society can be incorporated within an economic logic, e.g. by insisting that care work and sustainability are job and therefore growth-friendly.

Productivism is the belief that measurable economic productivity is the purpose of human organization.

Critiques of productivism center primarily on the limits to growth posed by a finite planet and extend into discussions of human procreation, the work ethic, and even alternative energy production. The New Zealand dairy industry faces political and commercial pressure to improve its environmental performance on the one hand while maintaining economic efficiency and commercial competitiveness in a global marketplace on the other.

‘Productivism’ is ‘the ideological fetishization of productivity growth’ as an end-in-itself, and it is reproduced via discursive, psychological, and institutional processes that subordinate social goals to market growth. Although productivism is often meant pejoratively as a general problem in politics and economics, most countries and economies are productivist in nature.

Contemporary welfare states are deeply productivist in that they frequently tie social security to market participation to stimulate labor commoditization and employment growth. While critics of productivism and its political-economic variants, notably capitalism and socialism, challenge the notions of conventional political economy and argue for an economic policy more compatible with humanity, these views are often dismissed as utopian by economists and political scientists, who hold that there is no conflict between the roles of the worker and the citizen, the father and the mother, and so on. Increasingly, ‘productivist’ welfare states not only view market participation as the end of welfare provision.

That is, that conventional economics, particularly macroeconomics, already accounts for the relationship between productivity and the freedom to enjoy that productivity. They also organize and deploy the commodifying power of the state via social services markets that extend the commodification of claimants in important ways.