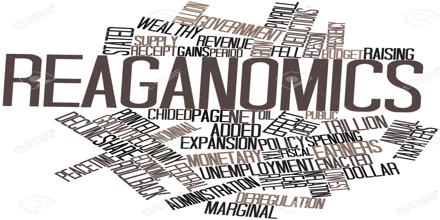 Reaganomics is a economic program, which emphasized low taxes, decreased economic regulation, low social services spending, and high military spending. It is a popular term used to the economic policies refered by 40th U.S. president Ronald Reagan’s administration between 1981 and 1989. These economic policies were introduced in response to a prolonged period of economic stagflation that began under President Gerald Ford in 1976. Reaganomics was successful in substantially reducing the high interest rate levels brought about by the stagflation and credit crisis of the 1970s.